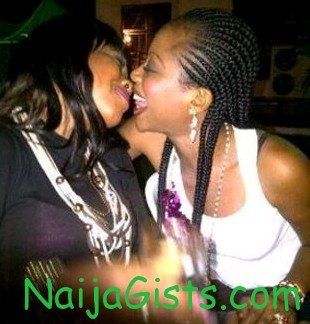 A 31-year-old married Nigerian woman has been declared wanted by Lagos Police officials for her alleged involvement in Lesbianism. naijagists.com

We learnt the housewife identified as Obinna Stephanie Onyinye was caught in the act with another woman back in 2012 in Shasha area of Lagos.

Her case was reported to Afonka Police division.

According to police report, a man identified as Mr Akin who caught Stephanie and her Lesbian lover Akin Dorcas together filed a report at the aforementioned police station.

Investigation also revealed that the two lesbian lovers were always seen together before the revelation. Sources said efforts were on top gear to track Stephanie down.

Practicing same sex relationship or marriage is a crime that carries 14 year jail term in Nigeria.

11 thoughts on “Nigerian Woman Declared Wanted For Lesbianism In Lagos”