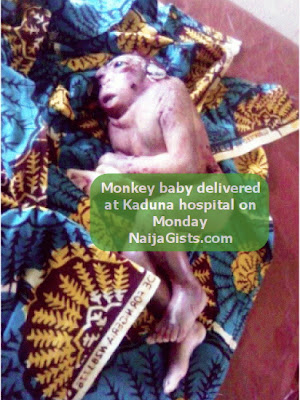 This one of a kind strange delivery happened on Monday July 8th, 2013 in Kargako area of Kaduna.

After several hours of painful labour, the strange looking monkey-like creature was delivered at Kagarko General hospital to a woman who hails from SabonIceh village.

The baby looked like human from the neck to the leg but the head looks exactly like that of a monkey.

According to Nurses on duty “The pregnant woman was rushed to the hospital at about 7:30 am, Monday. And we immediately took her into the labour room.”

“The woman came in through the out-patient department (OPD) after seeing the doctor on call and I decided to rupture her because the cervix was fully dilated. After I ruptured her,
fluid measuring about 26 litres gushed out after which she started bleeding. All this time, the baby was still in the womb.”

The baby died shortly after the delivery.

The mother who lost lot of blood during the painful child birth is still receiving treatment at the hospital.

What a strange world!