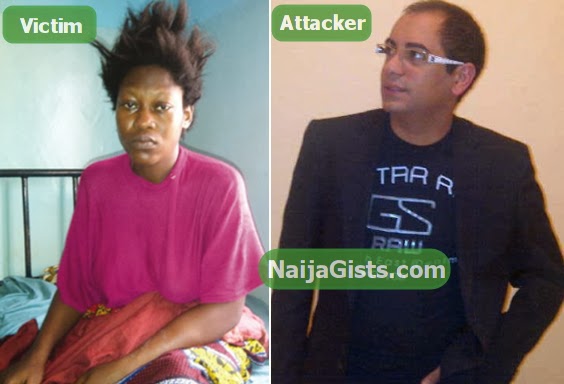 Mrs Alexandra Ossai, a 7-month pregnant woman has lost her pregnancy after a brutal attack by her Lebanese boss in Lagos state Nigeria.

Kaveh Noine, a Lebanese businessman allegedly kicked his employee in the stomach.

Ossai, who until December 13, 2013, was a supervisor with a Lebanese owned firm, Toppan Printing Company, alleged that Noine assaulted her many times during her eight months stay at the company.

She has undergone an emergency medical operation as her placenta was said to have been damaged.

She said, “I started working at Toppan in April. I earn N17,000 salary and work from Monday to Saturday. Anytime Noine was annoyed, he would beat the person he was angry with. Sometimes, he would throw whatever he can lay his hands on at the person. Prior to that incident, Noine had slapped me many times.

“Noine had said he would hold me responsible for the shortcomings of the people I supervised. As a result, I often assisted my subordinates in their duties to make sure that Noine had nothing to complain about.”

On the 12th of December 2013, Ossai alleged that Noine got angry when he saw something on the floor.

“It was a container for a drug. That is what we do; we produce packets for drugs and perfumes. So when Noine saw one of such packets on the floor, he was so angry that he gave me a blow to the chest,” she recalled.

She said Noine subsequently went into his office and typed a termination letter for Ossai, which she refused to sign. Her refusal allegedly enraged him further and after verbally abusing her, he was said to have told her that it was her last warning.

The following day, Ossai ran into Noine while coming from his secretary’s office. Noine allegedly dragged Ossai back to the office and called her a wicked woman.

Ossai said, “He said I looked like a mad person. After abusing me, he hit me on my neck twice. Then, without warning, he kicked my stomach with his knee. Some co-workers were there but they did not intervene. I felt a sharp pain in my stomach.”

To cut the long story short, she was rushed to the hospital last week Monday (December 16, 2013) when she started bleeding profusely.

The mother of one was told her placenta had been damaged due to the kick her angry Lebanese boss gave her in the stomach.

“I didn’t know that my baby had died until two days after the surgery. I was told my baby lost his face too due to the kick.” – Ossai said

The case was reported to the police station. On getting to Ossai’s workplace, police officers were told her Lebanese boss had travelled out of the country.

“It took a long time for the complainant to report the matter. But we are investigating.” – said Ngozi Braide, Lagos state Police spokesperson

What a gross injustice! This type of assault is uncalled for.

RIP to the innocent baby.