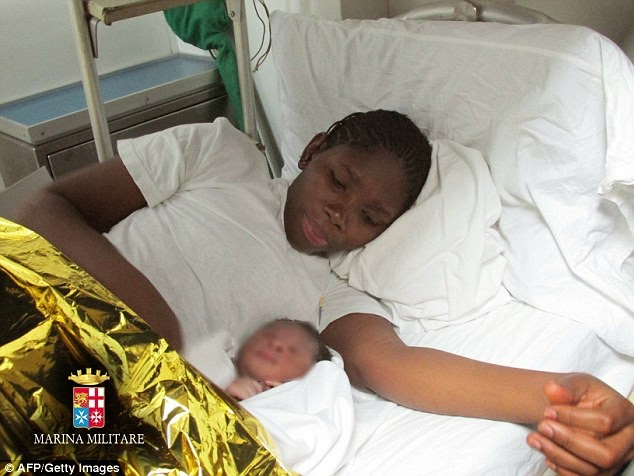 A Nigerian who gave birth on a warship after the Italian navy rescued her from a migrant boat has said that “Italy is better than Libya and Nigeria is the worst.”

She told Reuters on Monday her new daughter would have a better life in Europe, explaining why she risked the dangerous voyage.

Francesca Marina, named after St. Francis and the Italian navy, was 3.37 kilos (7 pounds, 7 ounces) when she was delivered aboard the Bettica naval vessel in the Mediterranean a week ago. Once ashore, she suffered from seizures and was put in intensive care.

A week on, both Stephanie Samuel, the 24-year-old Nigerian mother, and Francesca Marina have recovered. Doctors at the Sicilian hospital said they would probably be transferred to an immigration centre for families with small children in a few days time.

The story of the migrant baby born aboard a navy ship captured international media attention at the end of one of the busiest weekends for sea crossings from Libya to Europe this year, in which about 6,800 were rescued and dozens are said to have drowned.

Samuel worked for two years in Tripoli as a housemaid to save money to pay smugglers for the trip, but then the boat she set off in with about 90 others stalled after only three hours at sea.

By the time they were picked up by the Bettica off the Libyan coast seven hours later, she was unconscious after suffering epileptic seizures and had gone into labour.

“I didn’t expect the baby, you know, but she just like, she just came,” Samuel said. “I just wanted to leave Libya. Italy is better than Libya and Nigeria is the worst.”

About her daughter, she said: “God decides, not me … but I believe she will have a more good future in Europe.”

She said her husband, who is still working in Libya, was ready to risk the sea crossing to be with his daughter and wife as soon as he could afford to pay smugglers who demand up to $1,500 for passage on an overcrowded, rickety boat.