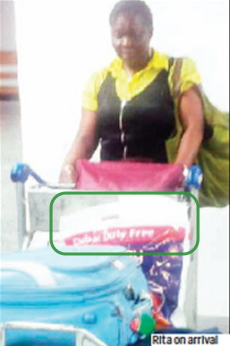 Another lady arrested for drug trafficking in Nigeria this week is 46-year-old Rita Godfrey.

The suspect said she collected 1.525kgs of cocaine while at the airport in Dubai, on her way from Spain. The wraps of cocaine were packed inside duty-free polythene bag. She was intercepted during inward screening of passengers, on an Emirate flight from Dubai. Rita said that she was promised N500, 000 to smuggle the drugs from Dubai.

“I’m a trainee fashion designer living in Spain. I had financial problem and was introduced into drug trafficking by a friend. They told me that somebody would give me the drug while on transit in Dubai. While at the airport, a man approached me and asked if I was Rita. He introduced himself; he said he was from my friend and gave me the drug in a duty-free bag.

I was surprised when the drug was discovered here because it was not hidden at all. I never checked it. I just kept it in my bag the way it was given to me.”

Failed Footballer Seriki Adebayo Arrested By NDLEA For Smuggling Heroin Into Nigeria From Mozambique
Photo: A Look Inside The Ikeja Lagos Hotel Room Set Ablaze By A Chinese Drug Addict