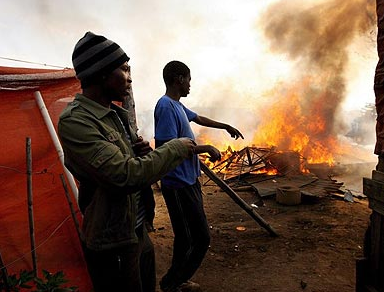 Some Nigerian businessmen were brutally attacked this past Wednesday and Thursday in Pretoria and Johannesburg by gang members and commercial Taxi drivers.

The haters destroyed over 25 shops and wounded many Nigerians in the attack.

According to Nigerian residents who survived the attack, at least 10 people are currently receiving treatment at an undisclosed hospital with many battling to stay alive.

Here is an official PR about the attack:

“Officials of Nigerian mission in South Africa and Union officers went round yesterday to assess the extent of damage done to business centres and shops owned by Nigerians. In Pretoria, 25 shops belonging to Nigerians were attacked and looted by the gang. Ten Nigerians are now receiving treatment in some hospitals while one of them is still in coma. We have reported the incident to the police in the central business district of Pretoria, where the bulk of the attacks took place. The South African police have made entry on our report and pledged to investigate the attacks. We have also appealed to our people (Nigerians) to be calm and law abiding because the Union and the Nigerian mission were handling the situation. As we speak, we have not recorded any attack today, April 4, and everywhere is calm.

Why are Nigerians hated in South Africa? This attack is becoming too much.