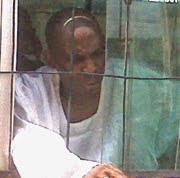 A self-proclaimed Celestial Church Prophet has been arrested in Igando Lagos.

56-year-old Alphonsus Ezie was remanded in Prison when the prophecies he made concerning his church members failed to materialize.

The self-styled prophet allegedly told his church members that he had a vision that they would travel abroad.

Ezie landed in trouble when he allegedly prophesied to members of the church during a service that he saw many of them travelling abroad for greener pastures and that they would come back home successfully. He reportedly told them that God had opened their way to Netherlands and asked them to go and obtain international passports and visas for the trip from his accomplice, Samuel.

It was learnt that more than 16 excited members believed the prophecy and went to meet Samuel in a popular hotel at Egbeda area of Lagos to pay for their travel documents, believing that God had answered their prayers. Among those who paid for the documents include:

The affected members later realized that they had been conned when they waited for many months and there were no signs they were going to travel abroad in fulfillment of Ezie’s prophecy. It was reported that when the victims confronted Ezie, they were told that Samuel had fled with their money.The members became angry and handed the prophet over to the police at Igando Division for deceiving them. The police later arrested Samuel and the two suspects were charged to court with obtaining and stealing money under false pretence

Ezie confirmed the incident but blamed Samuel for the alleged scam. The prophet insisted that Samuel betrayed him, blaming him for the prophecy not coming to pass. Ezie said he had been trying to settle the matter with the victims before they involved the police and charged him to court.

When the suspects were arraigned in court, they pleaded not guilty.The presiding magistrate, Mr P.E. Nwaka, granted them bail in the sum of N100,000 with two sureties in like sum.They were remanded in prison custody pending when they will fulfill their bail conditions.