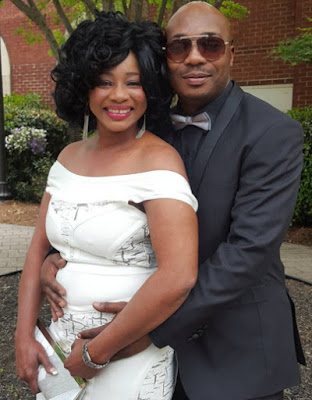 April 23, 2016 – Nigerians Call Clarion Chukwurah A Prostitute For Having Three Husbands At Age 51

The mother of Clarence Peter, the son of Afro Juju star Sir Shina Peters has come under fire for getting married for the third time in her life at age 51.

Clarion Chukwurah took to the social media on Wednesday to share cute photos from her legal wedding to a man identified as Anthony Boyd.

However the wedding has provoked reactions from members of the public.

Some feel her decision to give marriage a try at 51 is too late while others commended her for being brave.

See few reactions that caught our attention below:

Chipasha Muyangali said: “And she is supposed to be a role model? And what will she teach the young ones? Theresa Miller said, “He looks like one of these jobless guys in Europe or us looking for sugar mama in Nigeria to give them connection or money they don’t know all this Nollywood women are broke too.”

Why so judgmental? If she chooses to re-marry, who are you to judge? It’s her happiness that matters at the end of the day, so why all these nasty comments?

Yet you call yourselves ‘Christians.’ Jesus did not judge the woman who committed adultery. Everyone deserves to be loved and that’s it. Keep your ignorant, nasty opinions to yourself.”

David Faith shared: “The pursuit of happiness is endless. Chase your happiness rather than die unhappy because of what people may say.

I pray that the Lord will protect and uphold your marriage, your marriage will not fail this time by the grace of God.”

Ezechukwu Uchechukwu Jane noted : “How many times will she take congratulations on one issue. Well let me join others congrats.” Wase Forbes pointed out: “Good woman .

Mercy Osaenweife reacted: “You should be in your late 50’s madam, you’ll command more respect if you tell yourself truth about your age. Never give up in life. If plan A doesn’t work go to plan B and so on.

John Onochi said: “what will she gain by doing prostitution professionally, madam stop deceiving yourself, you are a prostitute period.

Another commentator, Wole Ojo said: This woman is a prostitute forget, she will get married again in 3 years.

The woman in question is an adult. She deserves some respect and privacy.

Hope she enjoys her marriage.

Continue Reading
You may also like...
Related Topics:clarion Chukwurah, prostitute