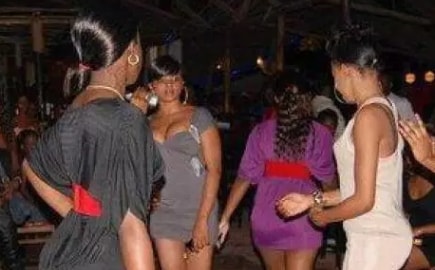 By Vera Chidi Maha, The Nation

Who is a prostitute?

It is a difficult question to answer. Who determines who a prostitute is? Is it the lady who stands on the street or a young girl out for a fling?

Many women are believed to be prostitutes, whether they acknowledge it or not; or how do you explain making unreasonable demands on a guy because you are having an affair with him, says Amaka, a 24-year-old, who claimed to have been a prostitute for close to four years. Many women, single and even married with children from supposedly settled homes, usually sneak out to merely see the town.

The debasement of womanhood has continued in the society with prostitution taking alarming proportions. Prostitution has now entered into different homes, offices and worse still educational and religious institutions. Considering the humiliation and pains involved, one wonders why it has continued to grow in our society. Very recently, I had a chat with this friend of mine in the course of doing this story.

How did you get here?

How do you mean?

I mean in this skimpy dress. I think you are showing too much of your flesh. Don’t you think people might take you for a prostitute?

So, what if I am a prostitute? Does that concern anybody? Is anybody feeding me?

Well, I do not regard you as one; you are simply my friend.

That is not, you know I am one of them and how can we be friends when we barely know each other? You cannot fool me with that statement. That is another lie that most of you telling. You give the bad names to only a particular group of women. If you are not a prostitute yourself, you wouldn’t be out at this time of the day.

I am happily married with kids. I have a good job as a journalist. Why would I want to prostitute?

If you are truly married, why are you here chatting with me? Is your husband aware you are here?

My husband knows the nature of my job and most importantly we trust each other.

You see what I mean? Who is hiding now? Who is the prostitute and who is not.

Like I earlier said, I am a journalist, and I am only trying to see the city life at night.

Okay now, so you mean journalist do not sleep around?

I have not said so, but there are no facts that journalists sleep around. We journalists work with facts and most times. Depending on the assignments given to us, we work under cover.

Facts my ass! You journalists only work with the things you manage to see; and what you see is not always the fact because everybody, including the mad man on the street, tries to cover something from everyone else.

So you are covering something?

This conversation is over; I have fishes to catch!

Look, Mrs Journalist, I hate people who pretend. If you don’t agree that most women are prostitutes like me, you are insulting my intelligence and making me feel dirty and I don’t have anything else to say to you (she walks away).

Many of the girls approached for chats refused to be bothered with an issue some of them described as useless talk.

Reasons adduced by other girls for going into prostitution as a means of livelihood were similar. They centred on poverty at home, high handedness by their parents or guardians, among others.

None of them, however, mentioned the chance that personal waywardness or the attraction to glamour and fast life could possibly have led them to that profession. One of the ladies who called herself Pinky informed The Nation how she got into the business at 17. She hails from the eastern part of the country and has the features of a beauty queen.

Already at such a tender age, Pinky has silently been carrying the scar of abuse in her story. She said she was introduced into the profession by her friends and she had been having sex since she was nine. Enticement with money by men far above her age played a big role in wetting her appetite for men and eroding her fears of parental reprimands. Before her parents found out and tried to rehabilitate her, ‘I was already far gone into the trade, but I never knew it would end up in full time prostitute,’ she said. Another friend, Uche, who spoke about the trade said many of the prostitutes came from diverse backgrounds, cutting across the rich and poor cadres of the society.

Many more are known to be undergraduates, even graduates of some well-known academic institutions. A particular alarming dimension that prostitution has taken is the increasing population of the girls currently adopting the trade. These days, it costs much less to have a lady. For a whole night, which is known as ’till day break’ or ‘TDB,’ you could pay as little as between N500 and N1000.

The campaign against unprotected sex and HIV / AIDS has no doubt affected the flow of business and the worst hits are the prostitutes of older age. The exploits of prostitutes and their exploitation by people are boundless. Due to poverty and neglect, many of them often end up in avoidable circumstances.

Becky, another friend, complained bitterly about her life as a prostitute. At pregnancies thrice, though she insists on the use of condoms by her clients, they usually ignore her requests. To keep going, her older friends have introduced her to various pregnancy prevention methods using highly restricted drugs.

Now, Becky is undergoing the side effects. She confessed to nursing the fear of damaging her womb as a result of the use of these drugs.

Angela, 24, who has been in the trade for over six years, said, ‘most widely held notions about prostitution and those practising it are untrue. Some of the girls you see could only have recently joined the trade to raise some money, quit and start a decent business’. Due to the situation in the society itself, the predominant notion that prostitution is a trade involving only women giving their bodies to men for sex in exchange for money has become subjective. Many believe that young men are competing with them in the business. These men are usually well dressed and often go out like their female counterparts to wait for rich, high class society ladies who come around to pick them for night outs. Majority of them end up passing the night with such women.

What is instructive is that most girls who find themselves in the indignity of prostitution are helplessly stuck, while the economy which is cited by most of the girls spoken to does not appear to be heading for improvement. Besides, the aspersions that prostitution casts on motherhood and if the problem has assumed such a dimension where men are now ready to look for fortunes from the bosoms of women twice the ages.

Continue Reading
You may also like...
Related Topics:Engaged, prostitute, prostitution