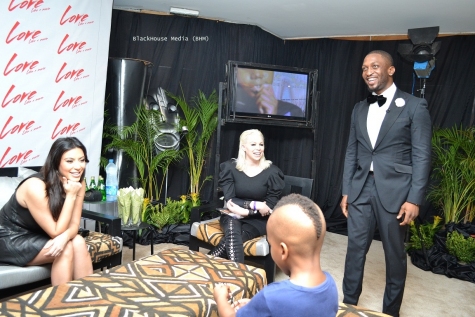 On Sunday the 17th of February, 2013, a former American p**n star, Kim Kardashian was paid a whopping $500,000 to feature in Love like a movie concert organized by R & B star Darey Art Alade.

To make matter worst Kim Kardashian left the shores of Nigeria less than 24 hours after the event.

According to Mediatakeout.com, some people who went to the concert were asked to pay $640 each to party and take pictures with her (Isn’t that ridiculous?)

Notable Nigerians including Charles Novia who attended the event are now speaking up on how their country folks refuse to set their priorities right.

Below are few comments from concerned citizens.

I see her as a talentless nobody,please am not hating or envious.I would never choose her life over mine.Her 15 minutes of fame has stretched so far,but will definitely come to an abrupt end.In America,what will keep you on top is either you have massive talent or from a very wealthy family,that is if you are seeking fame.My beef is the fact that she was paid “$500,000″.I want to ask those that have supported her rise to fame and how much she was paid, Is that amount necessary for her cameo appearance? She and Kanye were in Brazil maybe on a holiday or not which coincided with the Rio carnival,was she paid to come or they went for a short holiday?I don’t think,she was paid because the pictures showed them on holiday. We Nigerians have always been bringing black artists to Nigeria,so is she one now because she dating Kanye West?Nigeria happened to be the only country that has paid the highest for Kim and to make matters worse we paid the highest in the world for about 1 hour or less appearance in an event or short stay in our great country.We have shown the world that we do not know how to set our priorities right.I would have expected Darey and co with their education background to have got someone with more talent,that will be at least happy to be there,but it has shown that being educated,even going to private schools does not give you intelligent ,even native intelligent.look at KIm that does not have Darey level of education and moral upbringing/class outsmarting him.We Nigerians do not ask for too much just bring a well known and respected artist to Nigeria,not mediocre because she has a reality show.This is Kim that whatever the wife of Prince William does,she wants to do,she got married,she did the same shortly after her,her pregnancy was announced,she and Kanye announced their,the Duchess is due in July,she announced hers is due in July.This is a lady that did a photoshoot with a certain magazine in New York,and most designers refused to give the editor some of their dresses for her to use for the shoot.The real wealthy Americans and real A-list artists do not want to have anything to do with her.Even events like the Met ball in New York that she really would like to be invited,but has not been invited due to her infamouse rise to fame(sex tape and no talent).This is the same person wealthy Nigerians with so called class were falling over to take pictures with,no class in Nigeria.How I wish we had put our house in order so that we can attract big time artists especially blacks who will be proud to come to the most populated black country in the world for visit,holiday and to do collaboration with our artists,even events.If they can come to the Uk without being paid why would they not want to come to Nigeria.More artists go to the UK than they come to their next door neigbour Canada.It is all about how you package yourself/country.We cannot get their unless postive changes start from the top(presidency)

Inferiority complex has a lot to do with this,Nigeria is full of wanna bees, and we worship America from its “stars to fake stars”, anything American spec is marveled to an extent beyond my comprehension, our great nation is full of great potentials, our citizens are diehard survivors, our capability is beyond any other, Am sure their are capable persons that can do better, hey am not the one writing the $500k chec, its unimaginable about the decision that went in to inviting Kim K to Nigeria and pay her $500k for less than 1hour but then again its Nigeria we are talking about many things has gone on in Nigeria thats unimaginable, Even if i want to hate on kim k, i cant if someone is willing to pay u $500k for 1hour work I’d say take it,m I know I would.

I have often mentioned that Nigeria suffers from inferiority complex. If this is not the case, can someone tell me the justification for paying a classless, illiterate, no-talent having Kim this amount of money, as a role model for young Nigeria girls or as an entertainer of world class? A cheap whore who makes a living pimping minority sports and entertainment stars in the US. Someone who is a no body in America and Oh yes I am speaking what I know because I live in the US. Inviting a camera crew to your house 24/7 to film your stupidity for a lifestyle does not qualify for an entertainer. So what does her visit represent? Americas best? Goes to show that we would rather have a second class, lowlife approve whatever we do in Nigeria as long as they are foreigners than use our own.

$500,000 for 45secs is promiscuous gratuity for a porno star on a day hungry miscreants kidnapped foreigners for ransome. What moral message or economic value has her visit added to Nigeria? The idiots behind this trend of bringing foreign clowns to rip-off unsuspecting Naijas should be ashamed of themselves. I’m certain the mugu that paid half-a-billion dollars to amoral Kim Kardashian does not have 100meters of tarred road leading to his enclave. Talkless of electricity! With armed-to-the-teeth Nigerian Police Force flexing marijuana muscles to protect the wayward Ashi while the Bokos sack their stations, I guess it will take an army battalion to host Oprah. From the Williams sisters banging around tennis balls to Denzil Washington making cameo appearances, all is Naijas’ folly. Those that paid for a photo clique with Kim are suffering from Colo Mentality. Aborigines! $500k buys a transformer that can light-up an entire enclave. Colo Animals!