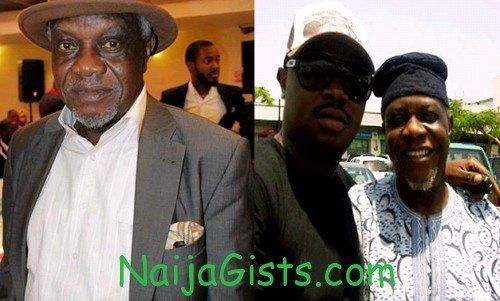 Just less than a week after the sudden death of two top Nollywood actor namely Lugard Onoyemu and Collins Ifeanyi Chukwu who died in Surulere Lagos and Abuja respectively, Nollywood movie industry has been hit with another sudden death and it’s veteran actor Justus Esiri.

Nigerian actor Justus Esiri is dead. He passed way on Monday night after a short-time battle with an undisclosed ailment in his hometown.

Dr Sid’s real name is Onoriode Esiri, he is the youngest child of the deceased.

As at the time of this report, no detail has been released regarding Justus Esiri’s death but it is a shock to everybody as the family only released this few hours ago.

Our source said the now late actor Justus Esiri has been secretly battling an age related illness for a while but his family chose to make it a secret until his sudden demise last night at the age of 71.

A source who claimed the angel of death has visited Nollywood might be proven true with the sudden demise of top Nigerian movie stars one after the other within the past 12 months.

Stay in touch with NaijaGists.com for update on Justus Esiri’s death.

Before his death, he was a member of the Order of Niger (MON). He came into limelight in the early 80’s through the popular Village Headmaster TV series.

He has also featured in many interesting Nollywood movies.

A Little about Late Justus Esiri: He was born in November 1942 in Oria, Abraka, Delta State.

His studied at Catholic Secondary school in Warri in year 1948 before proceeding to Maximillan University in Munich, German in 1964. He also attended Prof. Weners Institute of Engineering, West Berlin, 1967 and the Ahrens School of Performing Arts in 1968.

Justus Esiri, detoured into motion picture production in 1968 as a staff of the Schiller Theater, Berlin, Germany, where he stayed till 1976. During the 1977 FESTAC held in Lagos, he choreographed the Modern Dress exhibition. From then onwards, the sky was indeed not the limit for Esiri. He was Production Manager for Dinner With The Devil. He worked as News translator and Newscaster with the Voice of Nigeria (German Service).

We will bring you more updates as they become available.

May his soul rest in perfect peace and may the Lord grant his family the fortitude to bear his loss.