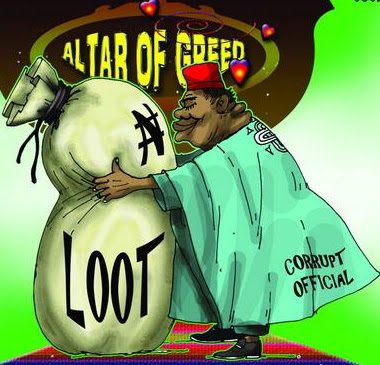 September 22, 2017 – Nigerians Suffer & Die Because Greedy Political Leaders Have Stolen The Wealth Meant For All

If corruption does not kill your spirit in Nigeria it will be because you hope to survive to see the corrupt perish. Leaders have sold their conscience to the devil just so they can amass public wealth for themselves. Projects that enhance social well-being of the citizens are abandoned because officials compromise their responsibilities for personal gain.

People suffer and die because their fellow beings or are they monsters have stolen the wealth that should be sufficient to provide a decent living standard for all. Travelling on the highways is like living a nightmare. Broken down roads have turned drivers into redeemers. They stay alert while driving like cats dodging and jumping potholes. Meanwhile, their eyes are beaming the distance watching for armed robbers.

Stressed out citizens antagonize each other for the misery of their lives. They engage in useless cursing and fighting. The devils that mastermind their destitution mask themselves in white kaftan and jolly faces preaching the gospel of restructuring and indissolubility of the nation. They distance themselves from the anguish of the masses by providing maximum comfort for them and their families at society expense.

The people are suffering from high price of food items in the market and the rogues are failing to realize that a hungry man is an angry man. It will flash in their eyes when the mob goes on rampage. The sky will be burning with disgust.

Sweet talk of the wicked will not appease the appetite for disaster by the resurrected cannibals they created from their mischief making. When talking to the ear and it turns deaf when the head is chopped off, the ear goes with it. The despondent populace has given up faith in their leaderships to protect their interest. Officials at every level are viewed through the murky lens of corruption. Anarchy incubates in rumbling quarters.

The hammer will fall to shatter to pieces the glass wall. Despair in society cannot be contained when the oppressors are dancing naked in gaudy mansions. It is an indisputable fact that the brew of frustration will boil over. When in every direction one look hopelessness abounds, spirit of judiciousness will grow wings and fly into the wild.

The bottom has fallen out of the system and the rot must be allowed to empty into the ocean. The mindset of corruption has pervaded the national landscape. Torrential rainfall with catastrophic flooding of a hurricane will sweep through the land to cleanse the nation.

Doom looms like fear of danger from climate change. Devastation of the structures of government by the privileged does not give recourse to intellectual redeeming of the system. Where is hope for the ordinary Nigerian?

Rohingya: A Case For Minority Groups Everywhere
Biafra Quest: A Symptom Of Gross Injustice & Inequity In The Present Nigerian Federation