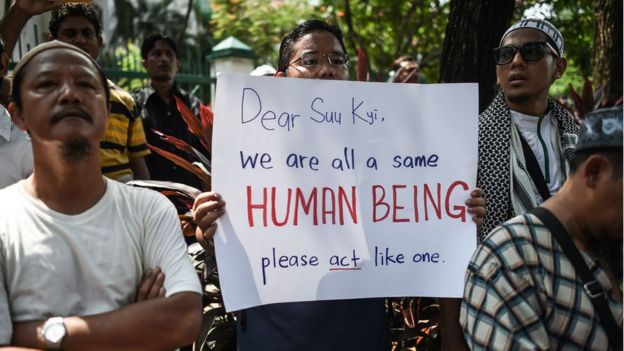 The news of the sad events that started on August 25, 2017 in Myanmar has once again proved how low people – both law enforcers and law breakers – are willing to sink when it came to matters of cruelty to fellow human beings.

group, leading to the deaths of 12 people that triggered the latest upheaval in that country.
So far, more than 310,000 people have been reported to have fled to the Asian country of Bangladesh, even though the Bangladesh population has rejected them. More are trapped on the border, amid allegations of the burning of villages and extrajudicial killings by security forces. According to some sources, the death toll from the unrest in the State of Rakhine is put at 3,000 if not more.

The Rohingya are one of the minority ethnic groups in Myanmar who are predominantly Muslim. Decades-old tension between the them and Myanmar’s leaders has led to longstanding restrictions on the their ability to participate in politics, move freely or even gain citizenship.

All over the world, condemnations, especially from top human right groups some of whom have described what is happening to them now as “ethnic cleaning”, and “crimes against humanity” has been pouring in from all directions.

The Muslim Zeid Ra’ad Al Hussein of the United Nation has denounced Myanmar’s actions as a “brutal security operation” targeted at Muslim Rohingya.
And because of Aung San Suu Kyi seeming refusal to intervene in support of the Rohingya, there has been speculation that the military, going with the Islamophobia of the overwhelmingly Buddhist Myanmar’s population, is trying to remove the Rohingya from the country for good. The situation is not helped by firebrand monks leading a campaign calling for them to be pushed out of the country.
At the moment, no one seem to be paying attention to the Dalai Lama who has called on the Burmese forces involved in attacks on the ethnic Muslim minority to “remember Buddha”.

In Washington, Donald Trump’s White House broke its silence and blamed the violence on both sides, the insurgent attacks and the ensuing violence from government forces.
There have been countless comments especially from Muslims, who have made a case against the hate and the persecution of the Muslim minority in Myanmar. I agree with this line of thinking, and I believe every right thinking person with a conscience should condemn what is happening in Myanmar today.

However, what is happening in that country is not peculiar to that country, it is not new, and as a matter of fact, it is still happening today as we speak, especially in lands with majority Muslim population.
The depressing news of even children reported to have been beheaded or burned alive reminds us that no minority group, ethnic or religious, is immune and that this sort of evil is historically speaking neither new nor remarkable

If the world, apart from speaking, which is what it appears we know how to do best and then continue with business as usual, had taken a firm stand against many of such atrocities before and even now in other places, maybe there won’t be a Rohingya massacres today.
For example, if we look back in antiquity, which space will not permitted me to do here, and around the world today, we would find countless examples of atrocities against minorities on all side.

All over the world, throughout history, we have seen evidence that ethnic cleansing and religious persecution of minorities has taken many forms over the centuries so that if it was not happening today before our very eyes, it would not depress me this much.
Massacre and expulsion were the most common methods of religious cleansing targeting minorities in most countries. And it appears almost all religions, using their governments and people, have been perpetrators at some point.
74
SharTestifying before the United States House Foreign Affairs Committee in May 2015, Sister Diana Momeka of the Dominican Sisters of St. Catherine of Sienna, Mosul, Iraq, said the following:
If you ask me, and I stand to be corrected, without excusing what is going on in Myanmar today, I believe except we choose to live in denial, Islamic lands appears to have the highest records of unfair treatment of minorities.

There are over forty-four Muslim majority countries in the world stretching from North Africa through the Middle East and into Asia with a population of approximately 1.6 billion adherents worldwide today.
According to reports, in 38 of these Muslim countries, Christianity is the largest minority, larger than the Rohingya of Myanmar today. Records shows that Christians in these lands, from Iran to Syria, Turkey to Lebanon, Egypt to Iraq, suffer severe forms injustices perpetrated sometimes by governments themselves and most of the times by non-state actors functioning as governments.

For example, in 2014, the armies of the IS in the Nineveh Plains of Iraq forced tens of thousands of families from their ancestral homes. For followers of world events, we saw the unprecedented killings of innocents, desecration and destruction of historic sites of religious and cultural heritage in that country. We saw the turning of an 800-year-old house of worship into a place of torture and churches into prison. An expert noted that as a matter of fact, Christian minorities in Iraq today are living on the edge of extinction.

Yet, the most vocal voice against Myanmar today, the largest Islamic country of Indonesia kept mute in the face of this. And as we I write, this same Indonesia is currently massacring black Papua New Guineans. So, what makes what the Rohingya Muslims are suffering today at the hands of Buddhist Myanmar different from what Arab Christian Minorities and Papua Guineans are suffering at the hands of Muslim Iraq and Indonesia?

We know the government of Iraq is fighting these forces, does that detract from the fact that in the last decade the Christian community in Iraq has plummeted from approximately 1.5 million to fewer than 300,000 and half of those are displaced.
Truth is, there is a worldwide range of policies in Islamic lands that restricts minorities, especially Christians, from living out their lives to the full like how Myanmar’s government is restricting the Rohingya Muslims?

For example, in Muslim lands there is prohibition on public preaching, evangelism, and distribution of religious literature, exclusion of foreign missionaries, harassment and intimidation of those who adhere to Christianity. There are sometimes mob violence and honor killings without serious condemnation from the authorities and the international community like Indonesia.
Although Blasphemy laws exist all over the world, they are most concentrated in Islamic countries where it is severely criminal.

In Pakistan for example, an outstanding case of one Asia Bibi who is still languishing on death row for six years now, after a questionable application of the blasphemy law, is well documented.
Another example is the fact that in Turkey as we speak, it was only recently that the construction of a Syriac Christian church in Istanbul was permitted by the government since 1923. Recall that Turkey used to be 100% a Christian country.

Turkey is not alone in this regard. In Egypt church unlike mosque construction projects require a special permit from the president himself and we continue to hear of wave of violence against Coptic Christians who themselves are at the edge of extinction in a land that was originally theirs.
There are countless examples which I believe some readers would find offensive and many, for political correctness, would condemn me for. But these are facts, and these people are human beings with rights as well, and feel pain and joy like every other human being.

Granted that there are many proponents of freedom in many of these countries, we also know that the general public in these countries at least tacitly support some of these discriminations. In 2013 for example, a Pew Research Center surveyed individuals in twenty-three Muslim countries and found that majority believe that Sharia Law should apply to all citizens, even non-Muslims.

Coming home to Nigeria, Bishop Matthew Kukah, in a talk delivered in the USA in 2016, insisted that even here, “the persecution of Christians in northern Nigeria” is as real as one can find anywhere in the Islamic nations of the world.

It is time the world takes a step further from mere condemnation to actually taking a firm stand against persecution of any kind. The powerful nations of the free world should use their influence to insist on freedom, of life, of speech, of religion, for everyone everywhere, especially in Islamic lands, who today find that their own brothers in faith are now facing in Myanmar what minorities are facing in their own lands. Because in the end, all humans are equal irrespective of ethnicity and religion.

Albert Afeso Akanbi is a Novelist, Researcher, Columnist and Humanitarian. He lives in Abuja, FCT, Nigeria.