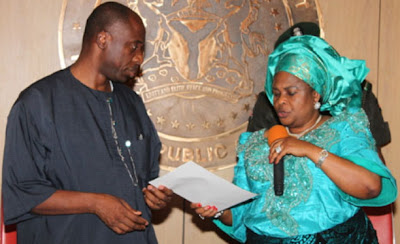 DEMOCRACY is readily associated with freedom: the freedom to be free in many respects and increasingly in Nigeria, many of our compatriots, particularly persons in positions of privilege and authority confuse this with the right to be disagreeable. The sober truth is that democracy is about rights and responsibilities, a democratic dispensation therefore cannot be a licence for disagreeable conduct as a norm; just as the possession of power in any form does not guarantee the right to be reckless or to ignore the etiquette required of office holders. Anyone in the corridors of power, either by chance or right, or appointment, is expected to behave decorously.

Dame Patience Jonathan, as she is now referred to, our President’s wife, failed the test this week in Okrika, Rivers State. It is trite knowledge that there is a critical difference between Yenagoa and Abuja, and a world of difference between being the wife of a Deputy Governor/Governor/Vice president and being the wife of Nigeria’s No 1 citizen. When people suddenly find themselves in such latter position, prepared or unprepared, anywhere in the world, they are taken through a crash programme in finishing and poise and made to realize that being the wife of an important man comes with serious responsibilities lest they sabotage the same person that they should be supporting.

If Dame Patience went through such re-orientation, the course was incomplete. This week, we got a feedback drawn from her visit to Rivers state to launch her NGO – the Women for Change Initiative, when she ended up in Okrika, her home town. This homecoming became an egoistic show-off as she openly contradicted the state Governor, offering him unsolicited lessons on how to develop the Okrika water front and school system, in addition to pointed comments on the use of the English language. The Governor had reportedly insisted that his administration must demolish some houses which adjoin the schools in Okrika in order to create a proper learning environment. Dame Patience disagreed.

She then gave an unsolicited lecture on the land tenure system telling the Governor: “I want you to get me clear. I am from here. I know the problems of my people so I know what I am talking…” The Governor tried to explain his administration’s policy and the larger public interest. The Dame reportedly cut him short: “But what I am telling you is that you always say you must demolish; that word must you use is not good. It is by pleading. You appeal to the owners of the compound because they will not go into exile. Land is a serious issue.” Wao! “that word must..is not good.” We must all commit that to memory as we re-learn Practical English according to Patience Jonathan!

If it is in the place of the President’s wife to teach a state Governor how to run his state, it is definitely not in her place to veto a state policy (the reason the governor used the word “must”), not even her husband has such powers. It seemed as if Dame Patience Jonathan was determined to impress her kith and kin. She told them she had directed the governor not to demolish their houses. Then, she left straight for the airport obviously having overstayed her welcome and having behaved like a bad guest. She was scheduled to visit the prisons to grant amnesty to some inmates (is that really her duty or something that should be in her itinerary? ); she was also meant to commission some projects. The face-off between her and the governor put paid to all that.

On the eve of her arrival, a group which calls itself “the Okrika Political Stakeholders Forum” and “the people of Kirikese” had actually placed an advert in the papers welcoming “our amiable daughter and sister…to Rivers state and your home town Okrika.” They also brought up the issue of “the land reclamation and shore protection project at Oba Ama, Okrika being undertaken by the Rivers state government.” (Daily Sun, August 23, 2010, p. 2).

Either on the strength of this advertorial or private consultations, Dame Patience must have felt compelled to be a partisan stakeholder and intercessor. She needed to put Rotimi Amaechi, the state Governor in his place and that was what did. She recommended “pleading,” – that advice is actually meant for her. A state Governor is a duly elected official; and in a Federal system, he is not answerable to the President, and nowhere is the president granted the powers of a Headmaster over state governors. In Okrika, Dame Patience behaved so impatiently and spoke to Governor Amaechi as if he is on the staff of the Presidency. It may not be her fault though. Amaechi caused it all by bringing himself to such level by undertaking to debrief Dame Patience about his administration’s programmes and activities in the misguided hope of getting cheap political endorsement. He should have asked his wife to attend to her. On the issue of land, Dame Patience should be reminded that the Land Use Act, Section 1 thereof, says the state Governor holds the land in trust for the people. Land matters in the state are beyond the ken of the wife of the President!

The wife of the President of Nigeria, or a state Governor, or a local council chairman, is not a state official. The same applies to husbands if the gender is reversed. He or she is unknown to the constitution or the governance structure. Recent history has however made it a convention to have the spouses of persons in such positions under the guise of providing support, play some ceremonial roles. This has been routinely abused. Under the Jonathan presidency, Dame Patience Jonathan even got a special allocation in the original budget for the 2010 Golden jubilee anniversary whereas she has no official, financial reporting responsibilities! The international standard is that spouses in these circumstances must not only appear but be seen to be above board like Caesar’s wife. They must not misbehave like Marie Antoinette.

When Cherie Blair, wife of former British PM, Tony Blair started buying up houses, apartments and antique furniture, the public raised questions. It didn’t matter that she was a professional in her own right, a Queen’s Counsel with a traceable source of income. There were also questions about the scope of Hillary Clinton’s influence during her husband’s Presidency: Americans wanted to be sure that it was the man they elected that was in charge, not his wife. A couple of weeks ago, the American public was up in arms against Michelle Obama and her poll rating dropped drastically after a visit to Spain where she and her daughter reportedly stayed in a $7, 000 a night hotel.

Much earlier, Nancy Reagan was also the butt of public criticism, with people asking: who is she? And this is not a female thing. In Britain, Prince Phillip, the Queen’s husband, is constantly criticized for putting his foot in his mouth. He once said for example that “British women can’t cook.” He told a visiting Nigerian President, all dressed up in babariga (name withheld): “you look like you’re ready for bed.” During a state visit to China, he told British students: “if you stay much longer, you’all be slitty-eyed.” Prince Phillip’s supporters insist that he is honest, but the majority ask: how is the Queen coping with such a man who is perpetually saying something offensive? There may be persons who defend Dame Patience’s aggressive style, but some of us ask: how is the President coping?

Since Dr Jonathan assumed office, he and his wife have been practically on the road. The Dame has travelled from one state to the other, under the auspices of the Women for Change Initiative. In every state she tells the women to vote and “make sure your vote counts if you like my husband.” Is she now a partisan politician?

The Jonathans must be told that Nigeria does not have a co-Presidency. We have only one president and his name is Goodluck Ebele Jonathan. And by the way, what does Dame Patience Jonathan do for a living? She obviously does not have to deal with the challenges of rotation and zoning in her home, unlike the three wives of the Adamawa Governor, Murtala Nyako for whom zoning and rotation have become topical subjects or the wives of South African President Jacob Zuma – that is why she can afford to be so meddlesome!

When she misbehaves as she did in Okrika, she creates the impression that her husband is not in control of his own home. First ladies are prominent figures but their conduct is an eternal subject of public interest. In Nigeria, there was Victoria Gowon, there was also Ajoke Muhammed: dignified and restrained. There was Maryam Babangida – she was influential but no one could accuse her of verbal recklessness; Mrs Abdusalami Abubakar was a court judge, totally self-effacing, No major social party was complete without Mrs Stella Obasanjo, yet she controlled her tongue. Mrs Turai Yar’Adua was described as the power behind the throne and she proved that during the period of her husband’s illness but she was carefully reticent. At the state level, there was Remi Tinubu in Lagos state and Onari Duke in Cross River state who have both conducted themselves responsibly in and out of office. The new First Lady likes to travel, party, and talk outside the script. People are beginning to learn to read her lips in order to understand her husband. Dame Patience must not push her Goodluck.

About the Author: This piece written by Dr. Reuben Abati, now President Jonathan’s Special Adviser, was published in The Guardian of Thursday 27th August 2010.