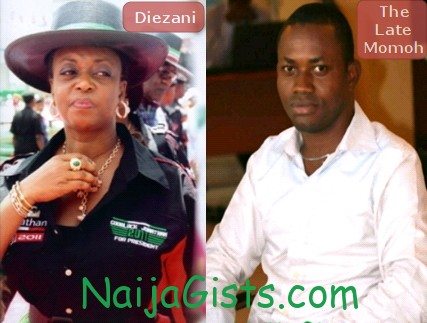 On Wednesday Sept 12, 2012 in the evening, the convoy conveying Nigeria’s oil minister, Diezani Alison Madueke knocked down and killed a journalist identified as James Momoh who works for Abuja based Pilot Newspapers. naijagists.com

According to reports, James Momoh was rushed to a nearby NNPC hospital where he was later pronounced dead.

The journalist’s demise brings to mind the reckless driving of Nigerian Government convoys and their lack of respect for other road users.

As at the time of this report, the Oil minister has not showed any concern or human feeling for the deceased and his family.

The chairman for Nigerian Union Of Journalist, NUJ in Abuja said Diezani is rather more concerned about protecting her image.

The NUJ chairman further stated that the union will not relax and allow reckless officials to treat human lives with levity.

He has therefore called for proper investigation into Momoh’s death as well as adequate compensation for the family of the deceased.

NNPC claimed on Thursday that a shuttle bus belonging to them knocked down the journalist and not Diezani.

However, the Nigerian Union of Journalist claimed her convoy killed the journalist.