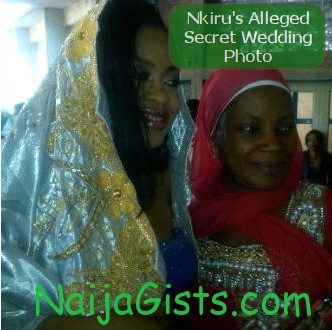 Fans started pointing accusing fingers to the Igbo-born actress for allegedly marrying an Hausa man, an already married man for that matter by the name of Alhaji Umar Sanni, an aide to Nigeria’s vice president Namadi Sambo.

Well to clear the rumour, the man in question has released a press report,

He claims he is not married to the actress.

While I hasten not to deny that Nkiru Sylvanus is my friend, I want to clearly state that I have never bought her a house and neither have I ever bought her a car. These, obviously, are the figments of the imagination of the reporter who chose to file his report without a by-line.

“Let me state that I did not, and have never approached Rochas Okorocha either personally or by proxy to help in engaging the said Nkiru Sylvanus, as she’s no stranger to the governor whom she has worked for his success at the polls.
“We are aware of a conspiracy by entertainment journalists, especially of Imo extraction that are against her appointment to always pursue in line that will lead to her disengagement in the service of the state they claim was not hers. It should also be stressed that a governor has the right to select whoever he wishes to work with provided the person will help him achieve his objectives of service delivery to his state.

The Nollywood actress in question Nkiru Sylvanus also sent out the message below via a blackberry broadcast and it states:

‘I am not married yet, I do not know where the story of secret marriage came out from!!!”

Wait a minute, she forgot to tell us what she was doing in the above picture.

Though the original source of this news still insists the actress got married secretly, we’ll have to take Nkiru’s word for it.

Now that we have heard from the horses mouth, this case is officially closed.