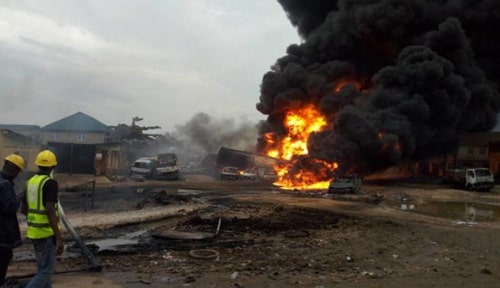 2 people died while 21 others got injured yesterday in a pipeline explosion at Ijegun, on the outskirts of Lagos.

At least 100 persons were killed in a similar incident at Ijegun 11 years ago.

The accident occurred around 4am when vandals were siphoning petrol from the Nigerian National Petroleum Corporation (NNPC) pipelines that runs through the community from Atlas Cove Depot in Lagos.

Thirty-one vehicles, including commercial buses, cars, and scores of lock-up shops were ravaged by the inferno that raged till 3pm.

Among the injured were three families on Catholic Mission Street, whose homes were gutted by fire.

Also affected were Amida Afolabi, his wife and children Rilwan and Morouf, and Nnabueze Emerukwa, 52.

The fire, which trailed the petrol poured in the drainage by the vandals, escalated to Fatade, Irede, Fire Junction, Rufai Ashimiu, Catholic Mission Street and Ijegun Last Bus Stop.

According to residents, the dead, whose identities have not been ascertained, attempted to scale a fence on Catholic Mission Street, but got trapped in the inferno.

They were said to have fallen into a petrol-ridden gutter almost at the same time a motorist drove by sparking the fire.

The bodies have been deposited at the Mainland Hospital Mortuary in Yaba, Lagos Mainland. The injured were taken to Igando General Hospital, Burns and Trauma Centre in Gbagada and LASUTH.