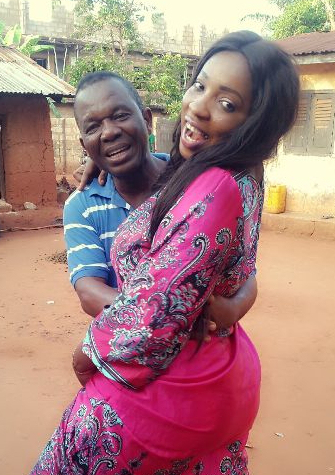 Veteran Nollywood actor, Chiwetalu Agu in this chat with Showtime Celebrity, explains what actually led him into acting comic roles, as he talks about grabbing actress Anita Joseph’s boobs on set…

Can you share instances when fans reacted to you with the belief that you’re a wicked man?

They have done daring things. Some of their actions look like attacks, but with my experience as an entertainer, I will say I saw all that coming, so I was able to manage all of them very well. But one day, while I was on Onitsha ‘Head Bridge’ on my way to Asaba, there was this traffic snarl that made us come out of the car. One fan came to hail me and slap me on the shoulder in the course of appraising my unique style of acting. Some other persons cautioned him, and he fired back by saying, ‘Don’t you know this man is my all-in-all? He makes me happy; whenever I’m not happy, I just slot in his movie, and I become happy.’ That was an embarrassing incident, but I saw it coming because that was the period I was playing evil diabolical roles. However, I also touch lives, because sometimes when we shoot movies, it’s like we’re telling some people’s life story. You know, talking about what happens in various families where wicked uncles deal with their nephews and things like that. But like I said earlier, I thank God that I have found a way of getting people to laugh at the same time they watch me play wicked roles.

Recently, a picture of you grabbing the boobs of an actress, Anita Joseph, on a movie set went viral; what really happened?

They are my daughters. It was a story, and we were playing our roles. Maybe you didn’t have time to watch that movie to understand what was going on. The main character in that movie was Ini Edo who was rascally, and more of a tom-boy. If she fought with my daughters, she would defeat them, so I did everything to prepare strong grounds for them to overpower her, but it wasn’t possible. So I said since that failed, let’s look for another way to prepare them to live their lives, so that any suitor who sees them will fall in love and marry them. That way, they will be useful since they failed in fighting a common enemy. The scene that went viral was where I was dressing them up for a burial ceremony that was coming up where I expected men to see them, and to find them attractive enough to take as wives. You know women’s bust plays a very big role in attracting any man who comes as a suitor, but people who wanted sensation made the picture go viral to sell their media. If I tell you now that I help some children in the motherless baby’s home, it may not be as sensational as when they say that I raped a minor.

Is there any role you would love to play that you’ve not had the opportunity to?

I am planning my own production outfit, and the name of my company is Chukwuwetalu Films. By the grace of God, when we take off, I’m going to be playing roles such as a true man of God, a romantic figure, and other characters that people haven’t really seen me portray. My fan clubs all over the world will then have the opportunity to see me doing well in those areas.