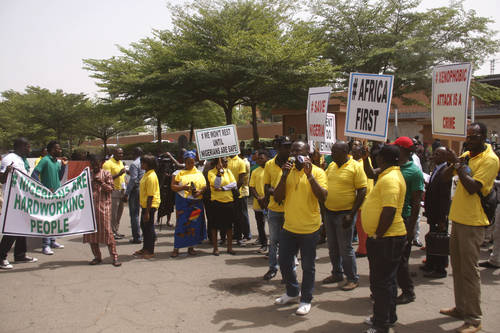 The President of Nigeria Union in South Africa, Ikechukwu Anyene, said on Saturday that lawyers are intensifying efforts to free some Nigerians arrested by the Department of Home Affairs in that country.

Anyene told NAN on phone from Pretoria, South Africa, that 65 asylum seekers, who were mostly from West Africa, were arrested on Friday during a protest at the department.

He said some of the asylum seekers, which included Nigerians, had embarked on the protest, alleging unfair treatment by officials of the department.

According to him, the Nigeria Union was notified of the protest which led to the damage of some cars and windows.

“We understand that 65 persons, including Nigerians and other people from some West African countries, were arrested during the protest.

“The Secretary of Nigeria Union, Olubajo Adetola, went to the Department of Home Affairs and spoke to Mr Marumo, Refugee Department Officer, on the arrest of some Nigerians.

“The union has also engaged the services of lawyers to assist in facilitating the release of the Nigerians.
“The lawyers are currently handling the matter and we are hopeful that they would be released today,” he said.