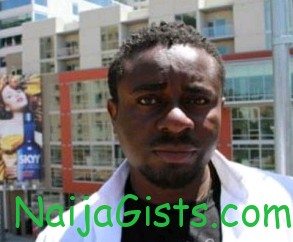 He has been regarded as a rebel in different quarters for his supposed anti-progressive stand on the Actors’ Guild of Nigeria, but in this interview, the Imo state born actor talks extensively about Nollywood, why he feels misunderstood by colleagues, and his plans for the guild.

Let’s start with your chieftaincy title. Why do you think you were made Ezekwesili in Anambra state, far from your home state of Imo?

I don’t know exactly what it is but perhaps it is in recognition of my efforts to make things better. It was not until I took the title home that I discovered I’m from a royal family too, although I didn’t get the title from my place. My father is the Opara-di-Opara (the man that gets to have the first anything in that community) of my village in Imo state.

What are the effects having this title has had on you?

Nothing has changed. I have just become more socially responsible and responsive to the society, humanity. It also gave me a leadership frame and helped me see myself as someone with a class of respect.

What is your take on traditional rulers in Nigeria?

I don’t have anything against traditional authority in any way. Whatever promotes humanity and redefines life are the things I want to be part of and support. If being a king will add value to humanity, I think it is my passion.

Away from that, why are you yet to return to the movies?

I’m not the only one who is missing in action. A lot of us are but perhaps I get noticed more because maybe I am most loved. We all parade ourselves as stars but we know stars have levels. Away from that, I am not the only one involved. Have you bothered to ask when last you heard of Oba Iweka road or of Idumota or Pound road in Aba? That was the last time we stopped being paid.

How do you mean?

As you can see, the investors in the movie industry (Bayowa Films, Remmy Jes, Kas Vid) have been run over by the TV houses, no thanks to some of my colleagues. Nollywood has been taken over and it is evident.

Did some players in the movie industry know about this alleged takeover?

Of course they did. They sold out to the TV houses and that has become the Nollywood we now talk about. Nollywood now exists only on Africa Magic, owned by South Africans. Meanwhile, while we were struggling to put the industry together, they (South African investors) were not around, but now they show our Nollywood movies and play their country’s soundtrack. They go as far as try to bring up their new faces and play him up with a stupid star and try to create a somebody out of him. That way they are building their stars, Jacob’s Cross, Tinsel and so on.

What efforts were made to preserve Nollywood’s integrity?

At a time, Charles Novia came boldly to say that very soon all the stars would be gone. This was because he knew what they had done. They had mortgaged the future of the industry making cheap benefits. There was a time we attended a conference in South Africa and these people (South Africans) were inquisitive, probing and wanting to know about how we make our movies. While I was speaking like a patriotic Nigerian, arguing against letting our strategies out, some of my colleagues quietly sold out, exchanging cards and numbers with them. Unknown to them, they were selling out. When I said then that Africa Magic was ripping actors and producers off, people said I was crazy, some of my colleagues were paid to put up words against my claim. Now, plenty of them have been forced out of the job, because people who pay and invest in the movies are no longer in business.

It got to a point all efforts to salvage the situation became impossible because there was so much politicking going on. First, their content provider, Emeka Mba was lobbied to becoming the DG of the Censorship board, not forgetting he was one of those who brought them into Nigeria. Mba’s position paved the way for them and made their business smooth. They needed to close down Nollywood to make TV more viable than it was, and that was when Emeka came up with the idea of every producer paying a sum of five million naira before their movies could get to the market. That was how it started and gradually some started falling off and a lot more were arrested for defaulting. Till tomorrow, I will keep calling Emeka Mba a criminal and I’ll never forgive [him] because he destroyed the interest of the industry for personal reasons. He was one of those who owned HITV, but shame on him.

Apart from job loss, what other impact has this alleged invasion caused Nollywood?

A lot, and most are negative. Now there is no more Infinity Merchandise, P. Collins, O.C Affassons and other big names we knew in those days. Places where Nollywood movies were readily available, like Idumota, Oba Iweka road, and Pound road, Aba have been shut down, leaving only Alaba in existence. Alaba; a place we all, as an industry, tried to close down. The invasion has been on for a long time, it has put the industry in a state of coma, and has finally killed it. Nollywood is dead and this is so because we are never going to have a big producer roll out money anymore or visioneers bring out money to invest. What we are going to keep having are scallywags and cheap production assistants running around to see how to put ten faces together and see if they can make at least fifteen thousand jacket sales.

But some of your colleagues seem to be enjoying the industry despite the challenges you have mentioned. Where does this place you?

They are not asking the right questions. I stood as Emeka Ike and made over a million jacket sales, only me, without putting twenty actors on one jacket. The cheap illiterates amongst my colleagues antagonize me, and I don’t blame them; I blame myself for mingling with them. I look at most of them (colleagues) and I begin to imagine the content in most of them. Most of them wear dark shades and parade themselves like they are more than they are. What are they worth when they don’t even know their rights in the industry, but go about posing on red carpets with dark shades and speak [with] some accent that was never properly learnt? All those are cheap ways of life. These guys don’t ask questions about what we are doing as a guild or an industry, and the few that do are labelled troublemakers. That is the mentality in Nigeria. Gani Fawehinmi was seen as a trouble maker till he died, same as Fela. These are the people who bring about change in their communities.

You vied to become president of AGN, but lost. If you had won, what would have been your focal point?

I am still the president of AGN, the legal president, but because of my stand, it is difficult to let men like me survive it, because if we do, we will destroy these evil men who run the system. The same thing is applicable in the wider world; responsible men are running away from politics, which is why a lot of riff-raffs are making headway in it. We need to redefine what value is to us. It’s not the dark shades and the glittering dresses but what adds to humanity, and we should be able to draw the line between what is value and what is not.

What is your take on Ibinabo Fiberisima as president of the guild?

Her swearing in was illegal. How can she be president? Please tell me. There is a court case yet to be settled involving myself and Segun Arinze. How then can he conduct an election? Again, Ibinabo has not been cleared with the police. I don’t know what is happening. Are these things supposed to be? The president ordered that all recipients of national honours that have criminal records should be stripped of them, and that is how it should be. We should run things right, at least for the sake of our children and ones yet unborn.

What would you say the guild is lacking?

Leadership. We have everything right now, and the few idiots that discovered this have quickly gone to register the guild as their personal companies. Do you even know that the AGN was originally registered as a company for individuals with just five board of trustee members? Most people don’t know this fact, including my colleagues. These are the things we are fighting against. While fighting to remove these guys, they appointed Segun (Arinze) as their president. I challenged this and took them to court but they broke the court’s injunction and conducted another election. You see the gimmicking of old politicians? That is what we are fighting, not Segun Arinze. He is my friend, so is Ibinabo, but we have to do right thing in this country; that is the only way a future can be built.

When did these problems begin for Nollywood?

It [has been] from the beginning. I’m sure not many know that the first president of AGN, Remmy Jes, was flogged out of office by the board of trustees. They used cultism and all other means. This is painful for me because I am one of those that fought for the name. When you say Nollywood, you can’t leave Emeka Ike out of it. I can’t keep quiet, although a lot of people may because they are scared for their careers, but I am a leader and will be their spokesman. People like me, who have the goodwill of the country at heart should not be afraid of coming out.

On a final note, Nollywood will be 21 this year. What do you think about its’ direction?

Nollywood is not going in the right direction, People saying that are people who are just happy that they have benefited from it. How can you say an industry that has its structure destroyed is in the right direction? We already made an impression on the world. All that was left was the technical know-how and government empowering us. We couldn’t get that, but rather got big foreigners who hijacked the gold from us.