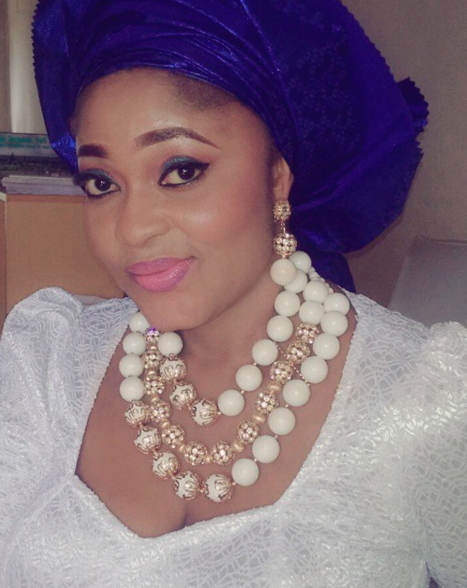 Nov 8, 2015 – Nigerian Actress Biodun Okeowo: I Left My Husband Because He Married Another Woman And Dumped Me

In this recent chat with Lanre Odukoya, popular Nollywood actress Biodun Okeowo reminisces on her grim tale of love and shares how she draws strength to give love a second chance.

How long have you been in this industry?

As one of the most talked about actresses in Yoruba movie industry, how would you describe road to stardom?

It has not been all rosy. I started with Ray Eyiwunmi organisation as an apprentice. I spent a couple of years there. I was like an apprentice there. I went for rehearsals, to location, but I thank God that it didn’t take long for me to hit limelight. Let’s just say I’m on the lucky side.

What were the toughest hurdles for you to face?

I didn’t know, so when I got in, I had to adjust and really do in Rome what Romans do, I was in another world entirely. And secondly, going to rehearsal when you get there late, it’s either you pay a certain amount of money or you receive some strokes of cane.

At times they will not even take your money, it’s that strokes that you will get because they realised that some girls would rather come late and pay some money than come early.
So, they sometimes refused the fine you have to pay and they give you some strokes of the cane. As an apprentice, there are people who you know are probably your age mate, but they will call you and send you on errands and you have to go. While running the errand sometimes, you begin to wonder what comes with the job.

Basically, you have to belly so many things, so many challenges, but as regards getting roles, I would say I’m somehow lucky because where I trained they don’t allow us to go to location you are not invited to.
It’s a rule in the caucus. You can’t just go to any location because they will tell you that if you start attending locations you are not invited to that’s when you get harassed unnecessarily. Before I started going out, I had done my first production that earned me a little respect.
So I get jobs. And, with the help of the press, I get jobs. I don’t really have that problem of lobbing for jobs because that movie shot me into limelight.

What movie earned you fame?

Tolani Osinrin is the name of the movie

It’s believed that for actresses to attain limelight she must date one marketer or the other. How will you honestly react to this?

I’m very sorry I wouldn’t want to go into marketers’ issue (laughs). Well, it’s a normal thing for a man to see a lady and admire her and want to date her and it’s also a normal thing for a woman to either accept or not.
Only a devilish man will take it personal or take it as an offence for turning him down. So it’s a choice thing. It’s not like anybody is holding anyone to ransom. So I don’t know how true that notion is.

Have you dated a marketer previously?

I’ve never dated any marketer before, quote me anywhere.
After two kids you still look very beautiful. What’s your secret?

I don’t do anything really. As an actress I’m even too big sincerely. I used to be trimmer than this. Let’s just say I’m more comfortable now. I’m not rich but I’m comfortable.

You were slim, how did you find so much fat?

Who is picking the bills now?

Nobody is picking the bills but jobs are coming in more now than before. And with all that is happening in the world now, you don’t need to think yourself to death. I just had to take life has it comes.

In your previous interview, you said you’d really love to remarry. What are your plans for marriage or is there still a chance with the father of your children?

The father of my kids has remarried and, for me, that’s a forgone issue. Though he came back, he did at a time I had already made up my mind.

Was it before he got remarried?

Yes, so I wouldn’t know if I’m supposed to be the first wife or the second one.

Is there no one in your life now?

There’s someone in my life

Is your lucky man also in the limelight?

Is he also an actor?

I wouldn’t want to answer that question (chuckles).

Well, do you know that even this life that we are living is borrowed?

And man proposes, God disposes. So right now, all I say to my God is ‘God let your will be done in my life.
Let it happen at the right time, at your own chosen time.’ I rushed into the first one when I was so naïve, so right now I’m taken my time because there is nothing to rush into anymore. I’ve gotten the fruit of marriage, which is the kids. So I’m not rushing. I’m taking my time.

For how long will you be taking your time?

For someone who has had a grim tale of love,what else about love excites you?

Well, there is this Yoruba adage that says: “Ti esin ba d’ani, a n tun gun ni.” (If a horse throws you off, you get up and get back on it). And another one says if an elder falls to the ground, he looks back.
When he looks back, he’d seen why he fell, he faces his front and forge ahead. The fact that you fall down doesn’t mean you should remain there. I’m someone that believes in love.
It’s true that sometime you might fall in love with the wrong person. You know, we ladies when we are in love, we love blindly.
You don’t even want to know if the other person loves you or not, but now I’m more mature. I can tell if a guy loves me or not. If he doesn’t love me, I go. So I think I’m more mature now. I now understand what love is, so it makes me happy that somebody loves me.

What is the greatest thing you’ve done for love?

I almost sacrificed my happiness, my education, everything for love, but thank God I got them back.

So who was that one person who supported your acting dream?

The person is the father of my kids. Then I appreciated it, but now I wouldn’t know if he supported me for the love he had for me or because he wanted to push me out.

Now I wouldn’t know anymore. Because if I sit back and think about it, immediately I said it that I wanted to act, he was like, really? Okay, okay go ahead. So now I look at it that maybe it was an avenue to push me away, but he was one person that supported me.

When you started acting, did you get carried away and started getting involved with men?

No. Even then I usually looked forward to going home. When we are rehearsing and it’s taking too long I would go to my boss and tell him I want to go home, that I’m missing my husband, but to my surprise, he would say: ‘Your husband, he just called saying that if we are busy I shouldn’t allow you go.’ And I would be sad because my mind would be at home.
Then, I didn’t know he had his reason, but now when I sit back and think about it, I realise that it was an avenue for him to push me away because probably I was choking him. Now I know better because the things he did afterwards…. don’t let me go into details.

Does this lend credence to the claim that it’s almost impossible for actresses to successfully keep their homes?

Let me just quickly chip in something – I was not legally married. I have never been married. Well, I would say it’s because we are in the limelight. It happens everywhere. Marriages these days don’t work because the kind of patience our parents had, we don’t have it. But because we are in the limelight, everything about us is in full public glare, so people tend to say all sorts. But marriages break everywhere.

Do you still bear some grudges against him?

No. I would say he didn’t want to get tied down as at then. In fairness to my mom and dad, they tried a lot. I’ve never seen where a family would be like ‘we don’t want money from you just come and do the right thing.’
I’m the only girl in the family, so that it won’t be a bad precedence, but when the guy wasn’t budging, it became glaring that the woman wasn’t needed in that family. So, even if I was not an actress, the same way he went about dumping me, I would say, he would still dump me.

I’ve never said it before, but you know, I just told myself that ‘Biodun, you have to say it or else people will tag me as one of those that probably stardom got into and she walked out of her marriage.’ Even if I was not an actress, he would still go about it the same way he went about it.

Do you think that like some men, the father of your kids thought he could always come back because you got kids together?

Yes, but in my case, he came back, but I never went back because I was once beaten and twice shy. But maybe because he was married at the time, he came back because I actually waited. I would have married someone else, but I had that belief that he was going to come back.

How long did you wait?

So how did you find the strength to love again?

I can’t kill myself. Will I say because someone has hurt me I will now recoil? Do you except me to trade my happiness for someone who never appreciated me. Do you know why am saying all this? I’ve never granted an interview that I will come out and say these things, but you know he’s now married, so why am I concealing things.