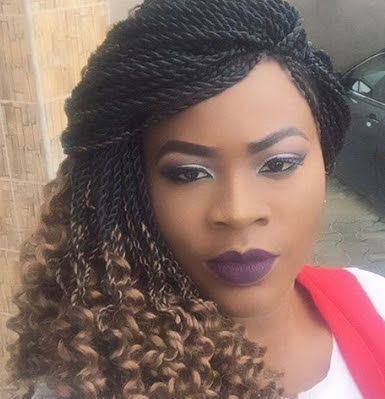 Nollywood actress Calista Okoronkwo who became popular after her Nurse Titi role in Clinic Matters recently recalled how she had an unpleasant encounter with a male friend who had the ugly impression that most Nollywood actresses are runs girls.

“That fateful day I went out with my sister to have a meal with a male friend. It was our first meeting.

We were having a great conversation, then in a blink of an eye, the guy spoiled the entire mood and said “what do you have to say about the fact that people see actresses as hustlers?”

He didn’t stop there. He went further to say he works with lots of top guns in Nigeria and he knows a couple of them who date actresses.

In a split second, the food went from good to bad…evening went from great to bad.

Our conversation turned sour. How do you say something like that to someone you are just meeting for the first time over a meal?”

The Celebrity Marriage star actress, said in her swift reactions towards her male friend’s presumptions, she found them unacceptable.

“Well, I actually saw that question as immature because the generalization is just unforgivable.

If that question was coming from someone I have known for a while, it won’t have been as offensive as it was.

“Trust my sister, she just stood right up and walked away. I did my best to maintain composure . It took the Grace of God for me to be calm.

Please let them stop this generalization. We are not strays,” she pleaded.

Wunmi Toriola: Why My Husband & I Married Secretly
It Is A Sin To Sleep With Sex Dolls, Men Will Soon Become Addicted To It – Sophia Williams