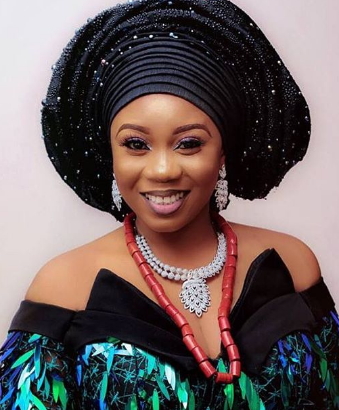 Wunmi Toriola: Why My Husband & I Married Secretly

Curvy Nollywood actress Wumi Toriola, is blunt to a fault. She is not the kind of person that would call a spade another name. She believes in saying it as it is. And, according to the thespian, that’s why some people couldn’t cope with her lifestyle.

The University of Ilorin Linguistic graduate, who has featured in more than 50 movies including ‘Alakada Reloaded’, ‘My Past’ and ‘Ayomipo’ amongst others, opened up on her journey to stardom, her relationship and fears. Enjoy it.

Can you tell us how you got into acting?

I got into acting through an audition in 2007. I saw an advertisement of a movie audition being coordinated by Funke Akindele. I was interested so I put in for it, and luckily for me, I was chosen amongst loads of people. The movie was ‘Isese Lagba’ produced by Tawa Ajisefini in 2007.

How challenging was it the first time you faced the camera?

Oh! It was challenging; I must be honest. The director then was Ojopagogo and I was made to act with popular faces, so I was a bit nervous. And because I have never been in front of the camera before, no acting skill was required but my talent.

So, you started acting officially in 2007?

No! After ‘Isese Lagba’ I stopped acting because I gained admission into the university in 2009. So, for me, acting started professionally in 2013 when I was doing my Youth Service.

Would you say your look aided your speedy growth in the movie industry?

I am one of those who believe in using what you have to get what you want. But then I believe in ‎the content more than the container. The container is just the look; the content is what you can give. But sometimes it is a plus because there are some roles people would say ‘okay, Wumi can fit into this perfectly’. For me, most of the roles I have played had nothing to do with my look. I’ve played a schoolgirl and that didn’t have anything to do with my look. All they wanted to see was my ability to deliver my role perfectly.

How do you cope with your male fans?

I have more female than male fans, and most are married women. I have few male fans and I cope with them well because I try as much as possible to draw the line.

You have a nice figure, is that your selling point?

My figure is not my selling point, my passion is. The drive I have in me makes me stand out.

Can you ever act nude?

No! I can never act nude. One of the reasons I studied languages is that it teaches moral and you know our society is against indecency.

Now that you have done your introduction, when is your wedding coming up?

My wedding is coming up soon. What remains is just the party aspect. Already, I am officially married because I have done the registry aspect of the wedding. I chose not to make noise about it.

Up till now, nobody knows your husband. Who is he?

I want my husband to enjoy his privacy and freedom. He doesn’t want publicity. Honestly, sometimes I want to flaunt my prince charming for the world to see, but he just doesn’t want it, and so I don’t want to push him.

Could marriage stop you from acting?

Marriage can’t stop me from acting. The passion I have for acting contributed to my choice of husband. He is someone that cherishes my job so much. But if I would be going on any break, maybe for child bearing, it’s surely going to be with full force. So, marriage is not going to affect my acting by the grace of God.

Aside acting, I do make up; I have a beauty store. I do events as well. Recently, I launched my clothing line.

Where are your weak and strong points?

I am someone who is very, very emotional; I just try to keep it away from people so they don’t use it against me. And for my strength, I would say sincerity. I am known for being blunt and real, which many people have problems coping with, because there are so many fake people in the industry. So, when they see someone who is real, they will have problems with him or her. But I don’t care as far as I’m comfortable with the kind of life I live.

Can you trust your friends being around your husband?

As an African lady, and with the several warnings from my grandma, I would say no. But sincerely I am blessed with wonderful friends. However, I will hold firmly to the elderly advice.

Jumoke Otedola: I Was Once Called A Husband Snatcher In A Crowded Hospital
Most Men See Nollywood Actresses As Runs Girls – Actress Nurse Titi