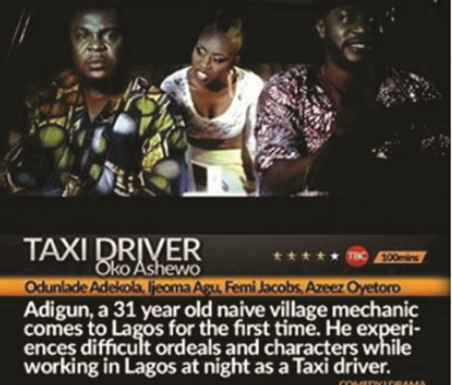 Despite the massive global release of Spectre, the latest instalment from the 007 James Bond Franchise, the huge news of the weekend is the very impressive opening of the locally produced Nigerian film Taxi Driver (Oko Ashewo) which has recorded a remarkable debut across screens in the country. Figures available at the end of the weekend indicate a very close head to head with the much publicised and highly popular James Bond Brand.

The Weekend Figures for Taxi Driver is considered by industry insiders to be the biggest of the year and share similarities with last year’s 30 Days in Atlanta which went on to defeat every Hollywood blockbuster in its way. What bodes well for Taxi Driver are the rave reviews it is getting for both the performances of the acting talent and the picture itself fuelling huge optimism that the lull indigenous films have witnessed in 2015 so far has come to an end.

Taxi driver (Oko Ashewo) is a hilarious comedy drama about working in Lagos at night, as a taxi Driver. It tells the story of how Adigun (Femi Jacobs) copes with dealing with the multitude of odd characters he comes across from Delia (Ijeoma Grace Agu) the queen prostitute, to Kakanfo (Hafiz Oyetoro) the unseen vigilante, the notorious assassins ‘three wise men’, to the Godfather, Baba Mistura and many more interesting characters that ply their trade in Lagos at night.

The movie taps into the premise of a movie centred around the hustle and bustle of Lagos. The movie also delves into the action movie territory, complete with the action and suspense that sets it apart from all other Nollywood films of 2015.