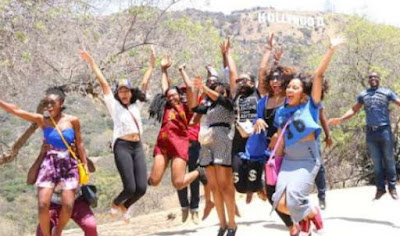 2 of Hollywood’s most illustrious institutions are partnering to present a weekend of screenings of some of the best Nollywood films in an event billed as the inaugural NOLLYWOOD IN HOLLYWOOD.

The events, scheduled for March 23 and 24 will be co-presented by the world’s leading film programme, the School of Cinematic Arts at the University of Southern California, Los Angeles, and Hollywood’s most prestigious screening venue, the Egyptian Theatre.

Many of the events will also be live cast to audiences in Nigeria and around the world.

In his remarks, John Hagelston of the American Cinematheque, operators of the Egyptian Theatre, said: “Africa’s most populous country is home to one of the world’s most prosperous film industries, but Nigerian cinema still has a relatively low profile in the U.S. The American Cinematheque’s mission to present the full range of motion pictures to the widest possible audience already includes annual programs devoted to new films from Spain, Germany, Italy, Argentina and other countries, so the chance to bring “Nollywood” to Hollywood for a night made perfect sense.”

Also, director of another selection, THE BRIDGE, Kunle Afoloyan, noted that “I believe the Nollywood in Hollywood event is a course in the right direction. I’m glad that The Bridge will be screening as part of the programs and I also look forward to mutual exploration between the two worlds.” [NAN]

Continue Reading
You may also like...
Related Topics:hollywood, movie, nollywood