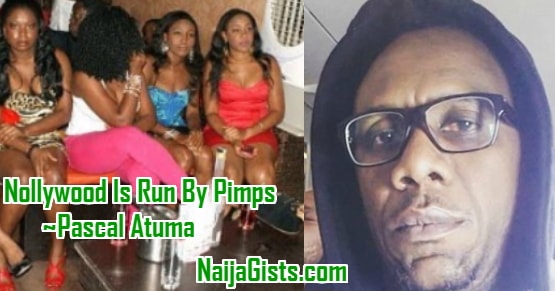 “Nollywood Is Being Controlled By Prostitution Rings, All Actors Are Prostitutes” – Pascal Atuma Warns Actors To Stop Deceiving People

In a chat with The Cable Lifestyle, Atuma alleged that the movie industry is being controlled by pimps and that upcoming actors and filmmakers should not be deceived by the glamorous lifestyles they see from the outside.

Here is what Atuma told The Cable:

“If you are not a full time prostitute or semi-prostitute, you will not make it in Nollywood”.

“Our ladies are using what they have to get what they want. Even some of the guys who can use their a** are the ones making it in Nollywood.

“I am being very real here and they make it look as if they are doing well but they are not, they are suffering.

The director of ‘My American Nurse’ dared anyone to challenge him on his comment, saying he’s ready to debate a contrary opinion.

“Pascal Atuma is my name and I am saying it the way it is and that’s the truth.

“If you want to challenge me on this, please come and do it on any national television in Nigeria or anywhere. I am even ready to pay for the challenge.

The director of American Nurse is currently in Russia for the 2018 World’s cup.

Continue Reading
You may also like...
Related Topics:nollywood, pimps