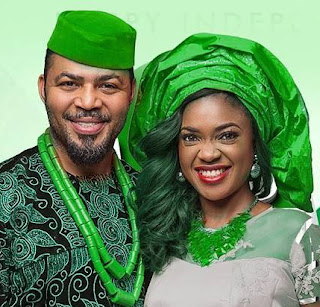 Nollywood takes a big step forward with the new flick, My Wife and I which story line is distinct from what we’ve had lately in the history of movie production in Nigeria.

Written by Chinaza Onuzo, directed by Bunmi Ajakaiye and produced by Inkblot and Filmone Distribution, the comedy movie hit the cinemas on September 1, 2017 with veteran actors, Omoni Oboli and Ramsey Nouah reuniting as a couple 10 years after their performances in Kunle Afolayan’s 2009 movie, Figurine.

Aside Omoni Oboli and Ramsey Nouah, Rachel Oniga, Jemima Osunde, Dorcas Shola Fapson, and Sambasa Nzeribe among others also feature in the movie. While Nouah pulls off the role perfectly, Oboli shows her amazing acting skills once again.

My Wife and I kicks off with a party setting. People, who had earlier been in a jolly mood, suddenly begin to look uncomfortable as serious arguments ensue amongst them. The protagonist couple, Ebere and Toyosi, (Omoni Oboli and Ramsey Nouah) are engaged in a heated argument over their children’s flight tickets to France. Toyosi feels Ebere is spoiling their children. Ebere, on her path, says it is an academic trip, not necessarily leisure. Apparently, their vocal conflicts go way back. Toyosi had earlier declined a job offer from oil company, Total, saying he wanted to farm. But unknown to him, his decision would ruffle feathers and cost him his matrimonial peace. Ebere could not imagine living with a farmer as her husband. She makes it clear to him on a regular basis that marrying him was the worst mistake she has ever made. 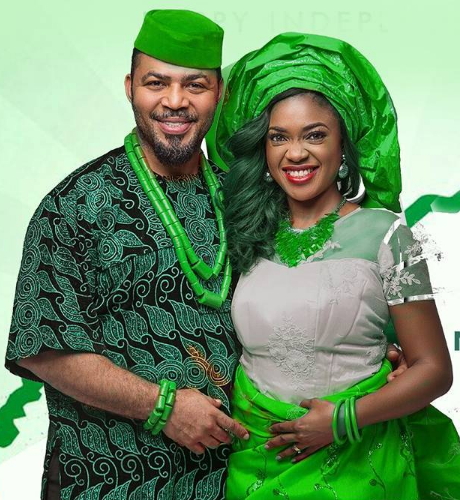 The couple are on the verge of breakup when Ebere’s mum suggests they see a counsellor, who happens to be a pastor (Seyi Law). After responding to series of questions, they leave for home only to wake up the following morning with swapped bodies – Toyosi in Ebere’s body and Ebere in Toyosi’s body! To them, the body swap is totally unexplainable. They are then forced to run back to the pastor but no help could be gotten from him. They then return home and decide to work together to prevent problems that could arise if they let everyone know about their predicament.

Bit by bit they begin to understand each other, discovering long lost feelings of love along the way. Their son, however, feels something awkward about them. Conversations are getting inappropriate where they used to be smooth; they seem to have switched tastes in food etc. Soon secrets are let out, hearts are scarred but in the end, shattered pieces fall in place.

However, the movie seems to have dragged a bit towards the end thereby making the viewers to lose interest. Quite right, a movie should revolve around a lead character or a set of people as in the case of My Wife And I, but the presence of the prominent actors seems to have been over-flogged.

My Wife And I is a bit different from the regular movies we see in Nollywood. Its end is not predictable and it teaches good moral lessons. Aside the fact that the cast is few, each character is played perfectly.

The movie is definitely worth seeing and most people who have watched it confessed that its storyline swept them off their feet.

Who says there aren’t good movies out there?

Continue Reading
You may also like...
Related Topics:movie, my wife, nollywood, review