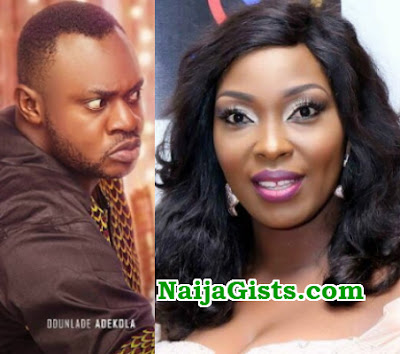 From singer to make-believe world, tell us about your journey?

My journey into the entertainment industry was actually not easy as an independent actress. I was determined and also worked assiduously with the help of God to retain and sustain my position as an entertainer because entertainment industry has been competitive, therefore making it difficult for undetermined person to sustain and retain his or her position. There’s an adage which says and I quote that ‘Slow and steady wins the race.’ This implies that one needs to be versatile and relentlessly hardworking and have it in mind that one day one will achieve his or her expected aims and goals efficiently and effectively. Above all, endurance is the best factor in the entertainment industry.

Will you be leaving singing for acting now?

Can I say no? Leaving my singing career for acting? No, I can’t. Because from the onset, I started as a musician and I considerably consider singing and acting as entertainment. So, I find pleasure in both. Whom God has blessed, no man can curse. God has endowed me with talents which I must showcase adequately to the world. Therefore, singing and acting are two combinations of talents and as a career I am not giving up on any of the two and with the help of God I know I’m going to succeed in both.

You recently launched a band, tell us about it?

Actually, about the band, I have already setup the band. I don’t know if you are aware of the ‘Unveiling of Oyita classic band’ which took place last year. Candidly speaking, those guys are wonderful…. I mean my band members, like seriously they are working assiduously for the progress of the band. Therefore, I have already unveiled my band and it’s called ‘Oyita Classic Band.’

Since you delved into acting, how has it been as an upcoming actress?

It’s been challenging! As a matter of fact, it has been ups and down. It is the grace of God that sustained me. You know as an upcoming actress, critics will surely come your way by your colleagues. It’s either they disrespect you or try to pull you down most especially when God singlehandedly elevated you above others. As an upcoming actress, I learnt a lot that exposed me to life and its realities. It also widens my intellectual horizon. Above all, endurance is the best, and it has been my watchword.

Did you have to play along to get roles like some other colleagues?

What kind of music do you do?

I do Juju high life and hip-hop as well. I can perform in every aspect of music because it is a natural gift from above and I expect to showcase the gifts efficiently and effectively because if I don’t, a day shall come when the giver of talents will ask me how I make use of it. I do all types of music. I have some singles on air; both hip-pop and afro because I mix Yoruba, English and the pidgin things to my music but I am re-branding. I want to go into live-band stuff. I’ve been doing the rehearsal. I’ve got band so we are rehearsing.

Are you married to someone in the industry?

Capital NO… I got married to a man of my heart and he is not an actor. My hubby is a lawyer and a business man.

How is your marriage

Actually, my marriage has been so awesome, wonderful and enduring. There’s nothing to be compared with being married. At times, mouth and tongue do fight and they’ll later settle it. There are bound to be mistakes as no one is perfect or an island. So, when there’s a little dispute, we come together and settle it amicably. We live in peace. Thanks

What is your spouse reaction whenever he sees you flanked by male fans?

My husband is an understanding person; he knows my job, and what it entails to be a celebrity. So whenever he sees me flanked by male fans he doesn’t raise eye brows. He is a very busy person; he does not even have the time because he is a lawyer and a business man. He is not a jealous type. My husband understands my profession as an actor and what is attached to it too.

Tell us how you came about the name Oyita?

I derived the name Oyita from my first name, second and third name.

Is it true that it is every actress dream to act alongside Adekola Odunlade?

Yes! I think so because Odunlade Adekola is a star, I mean, a well-recognized celebrity. With this everyone will like to be associated with such a person. Also filming with Odunlade Adekola enhances more sales in respected movie, with believe that he is accepted generally.

Have you had the chance to act in an English movie?

No! Not yet. But I am planning to do one very soon by God’s grace. It will be a boost to my experience as an actor too.

Tell us about your three cast movie?

My three cast movie unfolded the deep secret behind hackers out there, thereby teaching people to be aware of fraudulent act and be cautious too.

What informed the storyline?

Based on my experience and what is actually happening in our societies informed the storyline. And I thank God for making it a success. It was my first movie and it has paved way for me.

What were the challenges encountered while shooting?

Well! We encountered a lot but I am going to mention but few; mismanagement by the production manager or the location manager not all the time anyway! We might be shooting and some gangs will just attack you, asking you to settle them before using a particular area or building. We face difficulties shooting around parks and schools etc. Very challenging, I was thinking it will be very easy because it’s a three cast movie.

I’ve been producing but when I was shooting Jambata, it was a different experience having a three cast on set; I only have myself, Femi Adebayo and Yomi Gold. It was more tasking and the budget was more too. And we had to put it together and put in all our best for the movie to come out best.

How long do you plan to stay?

Everything is in God hands. We can only predict but God has the final say. Anyways, I plan to stay as long as the earth is still in existence lol thank you.