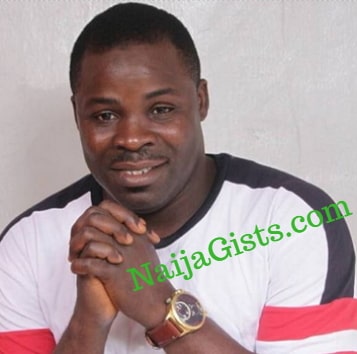 In this recent chat with Tony Okuyeme, Nollywood Oladapo Muyideen aka Lala shares his grass to grace story and how he became a Nollywood actor.

He also talks about his marriage, education and the movie industry.

Most people know you in the entertainment industry as Lala, but you also liked to be referred to as Omo Iya Oni-Ila. What is the story behind this sobriquet?

I am from a poor background, and education has always been my first ambition. I am from Osogbo, Osun State. My mother is still alive, while my father is late. My father was a farmer, while my mother is a trader – selling pepper, okro… That is why I used to call myself Omo Iya Oni-Ila (son of an okro seller). Even in movies, I say that, because I am proud of my parents, I am proud of my mother. They really tried; they wanted to ensure that I get educated, but unfortunately, they were not buoyant to sponsor me to complete my education. So, I stopped at a point. Then, I could finish secondary school. I went to learn motor mechanic job. I did for about five years before I graduated. But whenever I saw my school mates going to school, they used to pass by the mechanic workshop where I was an apprentice, and sometimes I was sad but there was nothing I could do then. So, I just accepted my fate then. But I still believed that in future something could still happen.

You were an apprentice in a mechanic workshop. At what point did acting come to the fore?

I am from a family that is noted for arts and culture. As I said, my father was a farmer when he was alive, but my mother is from a family popularly known in our town Osogbo as drummers. So, when I was growing up I showed strong interest in beating the talking drums. That where I first started. I can beat the talking drums very well. I started my journey in the industry since 1991, as a member of a group known as Dagunro Theatre Group. Fasasi Olabankewin, popularly known as Dagunro was my boss. He was the one who trained me in all the basic aspects of acting. I was with him for up to seven years, before he handed me over to the late Yomi Ogunmola, to train me more, my boss, Fasasi Olabankewin, popularly known as Dagunro so much liked; he be-lieved I have the talent, and whenever he had his production I was the one he called to assist in coordinate things. And I worked with Ogunmola until he died- may his soul rest in peace. He was a fantastic actor and director, which when he was alive, everybody loved he works, and even till date his works are still popular. I learnt a lot from Yomi Ogunmola. Later, I produced a film titled ‘Ikatose’; that was in 1999/2000. ‘Ikatose’ means the finger that committed the sin is what should be cut.

So, what happened thereafter?

In 2006, I was trying to go back to school to at least get my Senior School Certificate but all my effort was in vain then. In 2008, I went to a private school at Jibowu, Lagos, called School of Languages to enroll there. I went there to study English Language. It was a four months course. That gave me courage to further my education, because I saw many big who came there to study too. I thank God that in 2010/2011, I made up my mind that I must further my education. By that time my name was very popular as an actor. People were looking for me to work for them, but then, I thought about it that if I continue to focus on making money from acting I would not achieve what I want for myself in terms of education. So, I decided to use the little money I had to complete my education; and I went back to secondary school. After that I went to meet one of my mentors in the industry, Dr. Kola Oyewo, now an Associate Professor. I had heard about his story, and I was inspired by it. So I went to meet him and told him that I want to further my education, and he encouraged me to go ahead. He narrate his story to me and that if he could achieve what he had achieved, definitely, I could achieve more than that. So he told me to go and register for WAEC. So, I registered and sat for WAEC, and I passed it; I did well. I also registered for Joint Admission Matriculation Board (JAMP), and I also did well. I also wrote POST-UME and I got the cutoff mark. In 2010, I got admission to study Dramatic Arts at Obafemi Awolowo University (OAU), I graduated in 2015.

What inspired the movie ‘Ikatose’?

Sometimes, you see what is going on in our society; some people would die or suffer for what they know nothing about. That was why I sat down and wrote the story. It was directed by Yomi Ogunmola.

It was fantastic. We took it to the cinemas, and after that we released in the market, and sold it to Adesqueen Film Production, which handled the marketing of the film. Since then, I have produced about 15 movies.

Given your age and status as a Nollywood star, how were you able to cope with other students?

It was not easy, but as I said earlier, God made it possible, because I put my popularity behind me and focused on why I was there.

What about female fans and students?

They were there, since I knew that such a thing is what could bring problem for me, I focused my mind on what I was there to achieve. Apart from that I was a family man already. But I related with my classmates well. I even had a 16-year old as classmate.

How long have you been married now?

I have a wife and two children, and I am still praying to God to give me more.

Is your wife an artist?

No, she is a working class woman.

Sometime ago, your were involved in a car crash, what really happened?

I was in the university then. I was in three hundred level then. We were on vacation then, and I travelled to Ilorin for one event. On our way coming back, I passed through Ogbomosho to Lalupon side. We were about to get to Lalupon when a car lost one tyre. We were two in the car – the other person is the guy that drove me in the car. It was very serious. In fact, when people saw what was left of the car, many people thought that I didn’t survive the accident. But I thank God that I survived it.

The general notion is that most actors or musicians are womanizers. What is your opinion about this notion…?

I am not a womanizer, even apart from being an actor, because if you have a woman already and you should be satisfied with her. There is no need to womanizer. But as a man, I am a human being, no man that would say he is a saint, only God that can help you. I know that I can control my feelings when it comes to woman.

Sexual scandals have rocked the entertainment industry in the past few years. What is your opinion about this?

Well, I have never had any of such experience from any girl, but they’ve carried photo of me and an actress on set in a movie and posted it on social media, claiming that I got married to an actress. The photo was the taking from the role we played in the movie.

What is your opinion about the Yoruba movie industry?

I think it is growing, because the way I was brought up in the industry, by my boss then, late Yomi Ogunmola, who was a professional to the core. It is not just about movie, he started from celluloid then. I always say something, which is that you should make sure that you do something reasonable, something good, because when you do something good, you know that your job will promote you. I thank God that there is a lot of improvement in the industry now. If you watch Yoruba movies now, you will know that there is a lot of improvement.

What about the English language genre?

The same thing, there is a lot of improvement. You know that the cinema is coming alive, and this has helped a lot. Also, since I graduated from the university, my job has changed; I don’t act in or produce Yoruba movies alone, I also produce English movies also. This is because, I majored in Directing when I was in OAU. Although I had been directing before I went to the university, but when I got there I majored in directing, to know more about it. As I speak, I have directed three English movies, namely ‘Chameleon’, The Cooking Spot…

Which of the movies, would you say, it brought you to limelight?

Let me say that two movies actually brought me to limelight. One of them is Ekuro, produced by Funke Akindele. That was where I played the role of Lala. That was how the nickname Lala came about. Lala was a guy that has a sister. They lost their parents. But Lala loves the sister so much that he would do anything to protect her. Later, I produced my own movie titled Agidi, and I played the role of the same character Lala, but from a rich family.