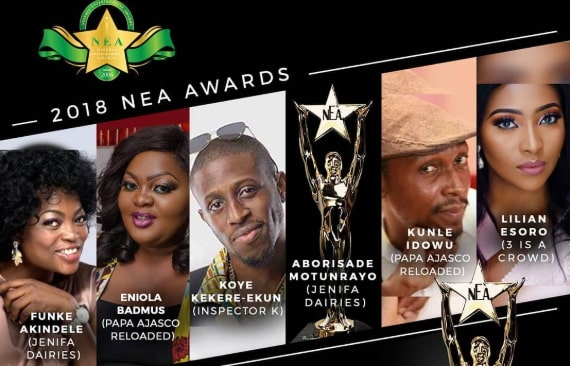 The 13th edition of the Nigerian Entertainment Awards (NEA) 2018 has been scheduled to hold on Saturday, the 10th of November, 2018. The award night will hold in Washington DC and the nominees have already been called out.

The NEA is spectacular because asides music, it also recognizes and gives due awards to entertainers including talented comedians, actors, record executives, Radio On Air Personality (OAP) and even disc jockeys.

In total, 22 categories are going to be recognized and awarded including Afro pop male artist of the year, Album of the year, best new act, trailblazer of the year and many others. Meanwhile, our artistes are making us very proud as most of the top artistes have been nominated for various awards. Most of these celebrities have undoubtedly put in a lot to keep us entertained all year round. They definitely deserve this celebration.

See the list of some of the nominees below;

Album Of The Year;

For Afropop Male and female artist of the year, a lot of our favorites were enlisted. This is going to be one tough decision.

AfroPop Male Artist Of The Year;

AfroPop Female Artist Of the Year;

Comedy Act Of The Year;

Lilian Esoro (3 is a crowd)

Radio On Air Personality Of The Year;

This will be a battle of the radio stations as the likes of Moet from Soundcity will take on Tisan from Raypower, Adeshope from Beat FM, Sophia Anidugbe from cool FM and Jennifer Nzewunwah from Kiss FM.

Squueze Tarela, Mr Shaa, Marz Brown, Peruzzi, Kayjay and Sammylee will contend for this one.

It gets even more interesting with other categories like Most Promising Act To Watch, Best Disc Jockey World, Best Music Producer Of The Year, Best lead role in TV (Non Nigerian), International Artist Of The Year, Alternative artist of the year.

You don’t want to miss this one, the full list of 22 categories goes on and on.

Who do you think will win what award? Start choosing your favorite acts and get ready to support them with your votes.