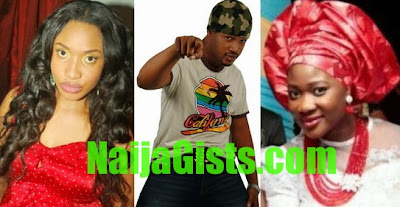 In a tweet, the actress called her colleague a fool for returning to work months after giving birth.

Tonto Dikeh even went to the extent of insulting Mercy Johnson’s husband and fans.

If you miss the full gist, read it here.

Check out Nonso Diobi’s tweets to Tonto Dikeh below

“just because she went back to work 2 months after her delivery doesn’t make u better than her, learn to respect people’s decision”
“she has a happy home and a happy man, so u don’t spoil it with your negative words… wonder what beef u had with her in d 1st place”

In another diss to Tonto Dikeh, Nonso Diobi gave Mercy Johnson a big shout out

“She didn’t reply her hate, she just continued with her work…dat is what is called the MATURITY of a woman which is rare”
“The industry is big enough to accommodate anyone, so why hate ur fellow colleague? Its not a competition”
“U don’t always have to trend in a negative way, u can’t disrespect your colleague and expect to be respected”

“Respect is earned, I respect most of my colleagues not those that act like they are more perfect than others”

Nonso Diobi is not the only person who blamed Tonto Dikeh for insulting Mercy Johnson.

The beef between the Nollywood stars started few years back on a movie set.