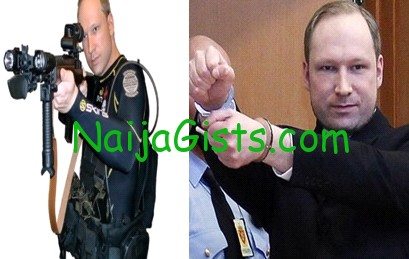 Anders Behring Breivik, a mass murderer who killed over 77 people in Norway‘s brutal gun rampage and bomb attack last year has been sentenced to 21 years behind bar. naijagists.com

He was sentenced at a Norwegian court few hours ago.

33 year old Anders Behring Breivik was charged with voluntary homicide for the brutal attacks in Utoya Island and Oslo on the 22nd of July last year.

He should have been jailed for life.

If he gets his chance again this guy’ll kill more innocent people.