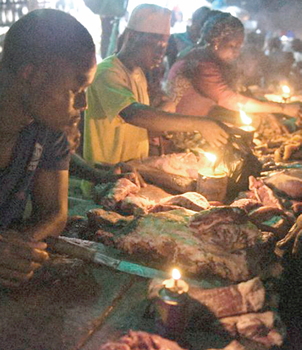 August 31, 2016 – Not Only The Dead That Buy & Sell At Night..See How Night Market Has Become A Lifestyle In Lagos

Against the popular ancient myth (especially among the Yoruba speaking tribe) that only the dead patronise night market, night market is indeed a way of life in Lagos. The typical lifestyle of most Lagosians- hustle and bustle requires ‘on the run’ type of living.

It is the reason people living in Lagos, especially the working class (bank officials, doctors, business tycoons, etc.) enjoy patronising night markets. They start their shopping even right inside the usual thick traffic snarl of Lagos. For Tomisi Ekundayo, a bank official, with one of the new generational banks, night market is the way out, after a stressful day at work and a saviour to her home.

“Buying from the night market is one of my favourite pastimes. I enjoy it and it is fun because different people are out to get one thing or the other. In fact, it saves me from having to get home and start thinking of what to cook. I buy the food ingredient from traffic at night.

Closing from work around 7.00 pm and I spend two hours before reaching home, I observe that things are quite cheaper at night than day time. Most interesting is that there are varieties of commodities to buy from different people. So, I start my shopping right from the traffic and often time from almost every bus stop the driver stops before getting to my bus stop.

Typically, I get most of my woman wears and accessories from night markets at a cheaper rate on my way back home.” According to Tunji Mayowa, a fashion designer, patronising night markets has become a hobby and an avenue to getting cheaper things.

“I buy things at cheaper rates at night because most traders are willing to sell all that is left of their goods so as to avoid left over. It has been a wonderful experience for me,” he said. But Mayowa expressed displeasure with the other side of night market. He said on two different occasions, he was robbed while trying to patronise some traders by the road side. Mrs. Chinaza Eze, a businesswoman, who deals in Indian fabrics, said as much night marketing is interesting, it could be dangerous.

According to her, there was a time she preferred buying her needs at nights to day time. But a nasty experience stopped her short in her desire for patronising night markets. “One of such nights, my purse was stolen and there was lot of money in it, including my phone.

And I had planned getting something for myself, my children and household items but all got lost within a twinkle of an eye. I cried bitterly that day. From then onward, I ceased patronising night market even when I feel tempted to do it, I resist the urge,” she said.

On passing by some of the places where traders displayed their goods by the road sides, New Telegraph gathered that most of the night traders prefer night trading to daytime, so as to avoid government agencies (KAI) who chase them away from constituting traffic nuisance.

Most of them told Daily Telegraph that they cannot afford the shop rent which they described as too exorbitant. Abbey Ikposo, a trader, said he doesn’t believe in paying N60,000 yearly as shop rent just to sell goods that put together may not be more than N40,000 perhaps. Reason he and others who reasoned that way prefer to cut cost by coming out at night to sell their goods thereby, evading tax payment and shop rent.

Ike Uzo, a cloth seller by the road side at Ojodu Berger, Lagos, said:

“ I don’t have choice but to take to selling at nights for no cost at all. My profit margin from night marketing is much more than what I could make by day time. The harassment of street urchins known as agberos has lessened. In fact, we don’t get to see them at all by that time of the day.

Wife Accuses Pastor Of Using Juju To Marry Her, Packs Out Of Matrimonial Home After 19 Years
Photos: 17 Hours Of Heavy Rainfall Recorded In Lagos & Ogun States..Flood Sweeps 3 People Away