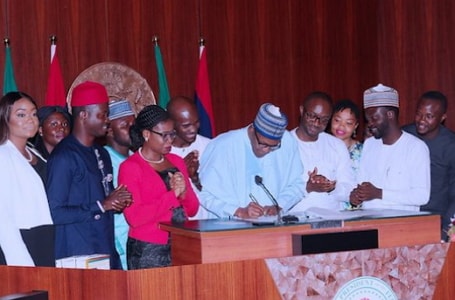 President Buhari just made history by signing the not-too-young-to-run bill into law, amidst cheers from Nigerian youths.

However, in the assented bill, the age qualification for governor and senate was retained at 35 years contrary to the demands of the Not Too Young To Run Movement.

While many youths are celebrating this feat, deep down within me, I’m not excited.

The scenario is akin to moving a treasure from the 3rd floor of a high-rise building to the 2nd floor, in a building that has no staircase or ladder, claiming that one has empowered the young man who requires to take possession of it by reducing the height where the treasure lies!

Now that the age of contesting election has been reduced, of what benefit is it to youths who cannot raise the required sum to pick up nomination forms?

Where then lies the benefit of reducing the age of eligibility to contest, without reducing the cost of nomination forms to amounts easily affordable by the average Nigerian youth on the streets?

With this proposed reduction in the cost of nomination forms, more credible young people will be able to come on board, while the political parties will still be able to generate a lot of money from sales of forms because of the large number of aspirants who will come on board.

President Buhari sarcastically added a caveat when speaking on the law, that “Nigerian youths should wait till after 2019” before seeking to run for the office of the President of the Federal Republic of Nigeria. He really didn’t have to spell that out because with the current cost of nomination forms, Nigerian youths will have to wait till African parrots begin to grow teeth!

Until the cost of nomination forms is significantly reduced to what an average Nigerian youth can afford, the passage of the not-too-young-to-run bill by the Senate and its signing into law by President Buhari, is nothing but a joke on Nigerian youths!

A New Nigeria is possible

About the author: Dr Thomas-Wilson Ikubese is the Convener of YesWeFit Revolutionary Movement and a 2019 Presidential Aspirant, on the platform of the Alliance for New Nigeria (ANN)

Continue Reading
You may also like...
Related Topics:Buhari, nigerian, Youths