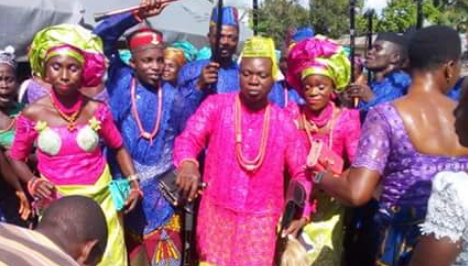 This article is about the Isoko people found in Delta State in Nigeria. The Isokos occupies the south east of Delta State of Nigeria, bounded by Kwale to the North, Ijaws to the south, Urhobos and Isoko to the west and Ndokwa/Aboh to the east. The Isoko people are mainly Christians due to the influence of western civilization but traditional worship still thrives among them. They are friendly, peaceful and very hospitable. Their major occupations are farming, fishing and trading. The Isokos are closely related to the Urhobos in terms of culture, language, dress, food and virtually everything. The Isokos as well as other tribes in Nigeria have their own distinct beliefs and taboos. I will specifically talk about the Isoko North made up of towns and villages such as Owhelogbo, Otibio, Eniagbedi, Ozoro, Otor-Owhe, Akiwhe, Erawha e.t.c.

Even with the advent of Christianity, the Isokos believe in gods and ancestors. There are various beliefs and taboos in Isoko North but I will restrict my writings to the Owhe clan in Isoko. The Owhe clan in Isoko North local government of Delta State is one of seventeen clans that make up the local government. Here are some of the beliefs and taboos in Isoko specifically Owhe.

In Isoko, it is forbidden for a woman to have an amorous relationship with another man other than her husband, any woman who violates this, faces terrible consequences that might end up in tragedy. It is believed once a woman from Isoko marries a man from Isoko or any other tribe, she is bound by an oath to remain faithful to her husband, this oath is effected during the traditional marriage in which the woman is given a drink and as soon as she takes it, she is immediately bound by the oath. It is important to note that the woman remains bound by this oath as long as she remains married to the man. Even in the death of the husband, she still remains bound by the oath and must never have any sexual relationship with another man except the bride price is refunded by the bride’s family, only then will the woman be free to have a sexual relationship or get married to another man.

The consequences of committing adultery ranges from the woman’s children dying one after the other, losing her husband and eventually losing her own life. As soon as the woman commits adultery, either the husband or the children falls sick and starts dying one after the other but these can be prevented if the woman confess it on time and immediately the elders of the land will offer a sacrifice to appease the gods and this is usually done by killing a goat accompanied by some rituals.

The fact that one is a devoted Christian or living outside the shores of the country does not stop the wrath of the gods on the adulteress. Ironically, this only applies to the woman, the man is free to ‘sleep’ with other women other than his wife without any consequence. It is important to know that this taboo is not peculiar to the Isokos, it also exist in some eastern parts.

In the case of incest, for example sex between siblings, parents and their children or between relatives, the consequences can very terrible often leading to death of the parties involved in the abominable act if nothing is done immediately to appease the gods. Even where the parties involved are not aware they are related, they still face the same fate as those that are aware. The only way tragedy can be averted is by appeasing the gods which is similar to the way it is done in an adultery case. While incest is a taboo in most part of the world, in Isoko, it is slightly different in the sense that if a man gets an erection from lusting after his sister or mother, he gets afflicted by the gods even without having sex with her and except the man confesses and sacrifice is carried out, tragedy is bound to happen often resulting in death.

Not Too Young To Run Law: President Buhari And His ‘Selfish’ Wish For Nigerian Youths
The Dangers Of Registering Students In Nigerian Boarding Schools