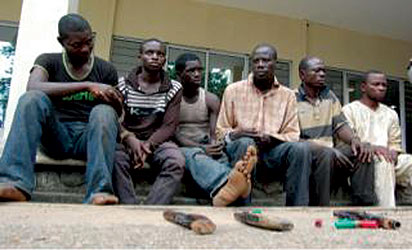 11 suspected armed robbers currently terrorizing the residents of Ibadan and environs have been arrested by the Oyo state Police Command along with eighteen assorted vehicles recovered from armed bandits in different parts of the state.

The suspects who were paraded before newsmen Monday at the state Police Headquarters, Eleyele, Ibadan included two ex-convicts who were released from prison few weeks ago.

Speaking with newsmen Monday, the state Police Commissioner, Mr Leye Oyebade said all the suspects have given confessional statements and they would soon be arraigned in the court of law.

While warning all criminally minded people to stay away from Oyo state, the state Police boss said the Command would continued to improve on its crime bursting strategies to ensure that the state is crime free ,adding that the command has re-engineered and re-invigorated its swift anti-robbery squad for effective crime bursting.

On the armed robbery suspects and serial burglars that have been terrorizing the inhabitants of Ibadan and environs, the Commissioner of Police said the four gang of robbers (Olusola Adenle 37, Rasaq Femi 23, Pul Olaitan 20, and Sani Abdulahi 26) had successfully broke into a dwelling house at Egbeda area of Ibadan and carted away various household items.

“The armed robbers who were armed to the teeth during the operation had planned to attack their victims who might want to put up resistance. Investigations revealed that the hoodlums who usually came from Ikire, Osun state are responsible for series of burglary and robbery operations in Ibadan and many parts of the state including Osun state,” he said.

One of the arrested armed robbery suspects who was released from prison some weeks ago, Paul Olaitan, 20 years old, said he used to be a Mass Communication student of the Polytechnic Ibadan before he was rusticated and expelled from the school due to bad behaviors.

Another suspect, also an ex-convict , Femi Rasaq told newsmen that he went into crime because he was fond of it , adding that he is a trained Barber but failed to practice the trade.

Michael Oladele, 25, who was arrested while trying to sell a Nissan Jeep in Ekiti state, explained that he was forced into car snatching because he wanted to make a living.

The state Commissioner of Police enjoined members of the public to continue to give useful information that could lead to the arrest of criminal elements still in the state, adding that the Command is determined to fight crime and make the state safe for all.

2 Arsonists Arrested For Setting Fire On News Agency Of Nigeria, NAN Office In Lagos
Photos: Meet Jude Izuakor, The Nigerian Man Who Stabbed Wife On The Face In Lagos