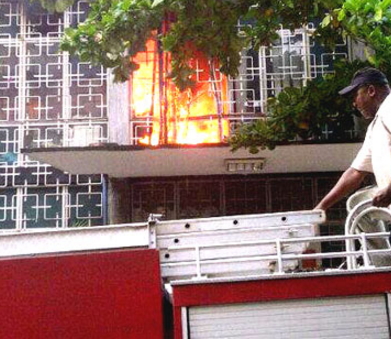 2 young men were on Sunday arrested over a fire that affected a thatched hut at the Media Centre of News Agency of Nigeria, NAN in Lagos office.

NAN reports that the hut was razed by the fire that occurred at about 3:30p.m.
Some NAN staff members and security personnel on duty were, however, able to prevent the fire from spreading to other parts of the centre.

NAN security men on duty apprehended the two suspects as they saw them flee the area after the fire occured.

After brief questioning of the suspects by NAN security men, they were handed over to the police at Iponri Division, Surulere, for further interrogation.

The suspects, who claimed to be welders at a nearby construction site, told NAN they were also engaged as security guards at the abandoned Nigeria Press Council premises behind the media centre.

They claimed that they were burning grass within the press council premises when the fire accidentally spread across the fence to the hut at the media centre.

“It was the wind that spread the fire to the hut,” one of them said.