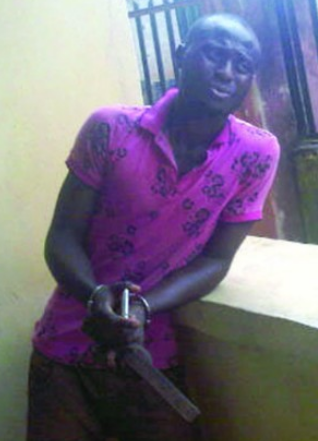 Kelechi Ikechi, a 24-year-old man from Abia state has been arrested in Ejigbo area of Lagos for theft.

The man recently caught for burglary told police that he only steals on Sunday by breaking into his neighbours home after they had gone to their various churches.

He was nabbed on Sunday after a vigilant neighbour set a trap for him.

Ikechi told police that he broke into one Peter Ibeh’s house at Afolabe Obe street area of Ejigbo to steal but was caught in the act when he was locked in.

He said he resorted to stealing from his neighbours after he lost his factory job.

He was arrested and handed over to Ejigbo Police division.

The court granted him bail in the sum of N100,000 with one surety in like sum.

He was remanded in prison custody pending when he will fulfil his bail condition.

The matter has been put over till Dec 1st for further hearing.