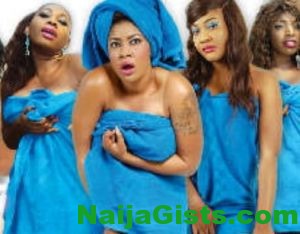 October 20, 2017 – How Nudity & Sexuality Is Taking Over The Nigerian Movie Industry

In Nigeria, Sexuality and nudity can sell a movie, but it doesn’t have the power to make or ruin an actor’s career.

In Hollywood, there have been cases of celebrities, who used nudity to kick-start a career. For instance, Kim Kardashian. We have also seen actors who won an Academy Award despite baring it all on screen – for instance Kate Winslet for “The Reader,” Charlize Theron for “Monster” and Halle Berry for “Monster’s Ball.”
Also, in 1995, Elizabeth Berkley, who was popular for the TV series “Saved by the Bell” was cast in the sex and nudity-laden film, “Showgirls.” The film was criticized as one of the worst movies ever, and her career was never the same afterwards.

In 2013, “Blue is the Warmest Colour,” a film with Lesbian sexuality as its theme, won the Palme d’Or at the Cannes Film Festival.

In Nigeria, it is a different case. While most viewers care about these sexually explicit movies – they are inherently voyeuristic – the Nigerian audience doesn’t care about the “braveness” or “hard work” that goes into going nude for the camera.

“Alter Ego,” a 2017 movie about sexual abuse and its aftermath, garnered a lot of attention for the raunchy sex scenes between Kunle Remi and Omotola Jalade Ekeinde rather than for its theme.

The audience also didn’t care that it was Ekeinde’s 1st movie in four years. They just wanted to watch those ‘hot sex scenes.’

Shooting a nude scene is bold and daring, but it has never accelerated an actor’s career or ruined one in Nollywood.

While some of them currently have a booming career, others don’t. However, their nude or sex scenes have had nothing to do with their success or lack thereof.

In Nigeria, an actor’s career is defined by his/her talent, hard work, personality and of course, network.

It’s no easy task shooting believable sexual scenes: There are big cameras, crew members and quite a number of strangers on set. Rarely do Nigerians appreciate the ability or decision of a filmmaker to beautifully tell a believable story with a tool as controversial as sex. The focus is always on the sexual activity, and most times, the female actor.

On-screen nudity is still somewhat a prohibited conversation in Nigeria. Take for instance the reactions to movies with sexual content such as “The Prostitute,” “Alter Ego,” “Devil in the Detail,” “Fifty” among others.