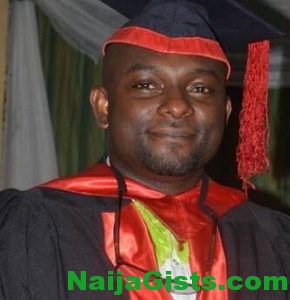 October 20, 2017 – Sam Uche Anyamele: I Quit Acting For More Education Because Nollywood Is Driven By Sentiments

Nollywood actor, Sam Anyamele, never thought that film acting would become his primary means of livelihood someday. As a teenager, acting was just his favourite pastime.

The actor, in an interview with our correspondent, revealed that although his passion for the arts and entertainment was nurtured through music, by the time he had left secondary school his eyes were already fixed on starting a career in music.

He could play the guitar very well and had, at different times, had short stints with different music bands around Lagos, including the popular DKB band – well-known for backing up most of the popular musicians in the country.
Also, Anyamele used to play in Sammy Needle’s band as a bass guitarist and backup singer.

Going down memory lane, he said, “My contemporaries were people like Mike Aremu, Wole Oni and Kunle Odutayo. Wole, Kunle and I used to be in the same band. I have forgotten the name of the band,

“At a point, I wanted to join Femi Kuti’s Afrobeat band as a guitarist, but the Christian in me couldn’t cope with the kind of lifestyles that members of the band led. I couldn’t imagine myself performing on stage alongside half-naked female dancers.

“I just couldn’t bring myself to play in such a band where people smoked a lot. I felt that, as a member of the Assemblies of God Church, I shouldn’t be seen in that kind of company,” he said. And that was long before he decided to focus on film acting.

Like most people, he was lured into film acting by the prospect of getting rich, getting famous and enjoying a glamorous lifestyle. But he did not get a break until he joined the cast of Wale Adenuga’s Superstory.

Ayamele was on the set of a new movie in Lagos last week. The film, tentatively titled, Mistake of a Night, is currently in the post-production stage. But it appears that his involvement in the work-in-progress was all about staying relevant in the fast-growing movie industry, which has evolved considerably over the last two decades.

To keep up the appearances, the actor had to squeeze out time from his tight schedule as a postgraduate student and graduate assistant at the University of Lagos, Akoka Campus to do this.

He explained why he decided to stay off the screen for a while and go back to school. “I have always thought about the next phase of life. So when I discovered in Nollywood that decisions were generally driven by sentiments and prospective actors were given roles on a movie simply on the basis of their looks, I decided that it was not the kind of place I should depend on for the rest of my life. As a pragmatic Nigerian, I had to think seriously about doing other things,” he said.

Continue Reading
You may also like...
Related Topics:acting, education, quit