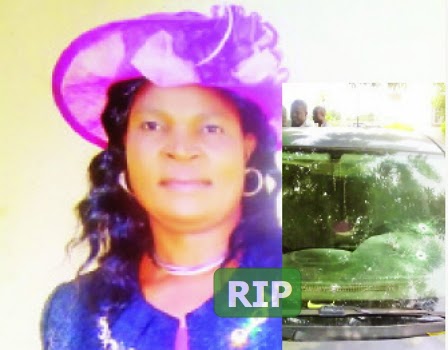 “This is the first time that I will hear this kind of thing in my life. Why wouldn’t the killers show mercy to a nursing mother? Why?” screamed the middle-aged woman, her face a picture of sheer sorrow.

“The innocence of this two month-old child will expose those who killed his mother. They will be arrested,” another woman sobbed.

The two were among the hundreds of sympathisers that had gathered to mourn the brutal killing of Mrs Lawrencia Leonard Onunkwo, a Bauchi-based businesswoman.

The 39-year-old Lawrencia, mother of four, a devout Catholic, was killed on Monday, October 13, by gunmen. She was shot twice on the chest at close range. She was with her two-month-old son, Moses, when she was shot.

The deceased and her husband, Mr. Leonard Onunkwo, a dealer in building materials, waited for 12 years after their last child before they had Moses. They had earlier had three children.

Mrs. Beatrice Ibe, a close friend of the family, recalled that Lawrencia was in a vivacious mood, as preparation was in top gear for the dedication of Moses.

The Ibes’ house had become a Mecca of sorts, as sympathisers thronged there since Lawrencia’s brutal murder. The husband of the deceased had relocated his family there.

The older woman, who is like a mother to the deceased, recalled: “We fixed the second Sunday of November, that is 9th, for the dedication of Moses at Our Lady of Loreto Catholic Church, Fadama Mada parish, and she was excited about it.”

“She called to inform me that she had booked for the reception at Chaba Hotel and we made arrangement for cooking, only to hear the news that she was killed. It is sad.”

Her death threw the Igbo community in Bauchi into deep sorrow. The sympathisers are mostly Igbo traders that had been living in Bauchi for many years. They gathered at the expansive compound of Chief Ibe, as the news of his wife’s death spread the next day.

Many questions bothered their minds. Was it the work of assassins or armed robbers? Was her murder motivated by envy? Was she cut short by her competitors? The faded ash coloured Opel that Lawrencia drove on that fateful day was parked in Chief Ibe’s compound, with two bullet holes, which penetrated the windscreen and snuffed life out her remarkably visible.

Inside the car, stains of blood, shoes, and some currency notes confronted sympathisers. And now, the question on every lip is, will the police ever find her killers and bring them to justice?

But the spokesman of the Bauchi State Police Command, who disclosed that the businesswoman was killed by armed robbers, has given assurance that Lawrencia’s killers would not go scot-free.

Mr. Haruna Mohammed, a Deputy Superintendent of Police (DSP) explained to Daily Sun how Lawrencia’s death was carried out.

He said: “At the point of entering her house, they attacked her and demanded for money. When she resisted, they now killed her and took away the money. It is an unspecified amount of money.”

“The commissioner of police personally went to the scene and summoned the Igbo community to his office and they had a thought-provoking but rewarding discussion.

“They were encouraged to assist the police with useful information on their immediate environment and business premises. The commissioner of police assured them of security, both to themselves and their property. They are very happy, even as he had ordered for investigation into the matter. The CID has taken over the investigation of the case and as soon as we get any breakthrough, we will let you know.”

A source told our reporter that Mrs. Onunkwo was paid a huge amount of money for the supply of poultry feeds and that the killers might have got wind of it and followed her home to kill her and obtain the money.

Her second son, Macochukwu, 16, a senior secondary student of ICSS, Bauchi, escaped death by the whiskers after witnessing his mother’s killing. He had gone to open the gate for his mother when he saw two armed men walking towards his mother’s car as she waited for the teenager to open the pink iron gate.

Maco, a lanky teenager, was at home with his siblings – his elder brother, their only sister and the last born, Moses, at their house in Fadama Mada area of Bauchi, when their mother honked. Their father was at Our Lady of Loreto Catholic Church in Fadama Mada at the time. His mum had just closed from her business located in the area where she dealt in hybrid feeds.

“It was around 7: 15 pm in the evening. When the car horn sounded, I rushed to open the gate for her,” Maco recalled. He said he had just opened the gate for his mother to drive her Opel car inside the compound when he saw the men carrying guns walking towards his mother’s car.

He said before they shot his mum, “one of the men wanted to shoot me because I saw his face and I ran back to the house. Then I heard two gunshots. After they left, I went to my mother. She was unconscious and couldn’t talk. They shot her in the chest. Our neighbours came out. Then I ran to the church to tell my father.”

The church service was midway when his son stormed the church, asking to see the father outside.

“I was a little bit surprised. I came out with him and asked him what the problem was and he told me. I rushed to my house and met my neighbour trying to drive out but didn’t know how to drive. I took the wheels and drove straight to the Tafawa Balewa Hosing Estate police station where I reported quickly before taking her to the Abubakar Tafawa Balewa University Teaching Hospital, Bauchi.” His wife died on their way to the hospital.

“Though I am not suspecting anybody, I know that what happened was out of envy because she was progressing and her business was booming. It might even be because they saw how we were living in peace. In such a thing, somebody can like to put problem in one’s family.”

When Daily Sun visited Chief Ibe’s house at GRA, men and women, the young and the old were weeping, united in grief, asking questions about the fate of the two-month old Moses.

Mrs. Ibe described Lawrencia, an indigene of Ideato Local Government Area of Imo State, as “a very friendly and calm woman who loved everybody, always cracking jokes, always happy. If you are upset and you meet her, you will become happy. I don’t know why anyone would kill such person. I have never heard of a woman being killed like that. She never told us she had problem with anyone. It is simply painful and a mystery.”

Mrs. Ibe regretted that the deceased’s plans to dedicate her child have been aborted with her death.

Among hundreds of sympathisers on hand to condole with the family was Bishop John Malachi Goton of the Catholic Diocese Bauchi. Goton enjoined Mr Onukwu to find a place in his heart to forgive the killers of his wife even as he enjoined the police to fish out her killers.

He said that although to forgive killers of Lawrencia might seem pretty difficult, it was commanded by God even in the most difficult situations.

The Bishop, who lamented that the deceased was the second victim from his parish that was killed within the spate of one year in the state, condemned the killing of Mrs. Onukwu.

He said: “People who take the lives of their fellow human beings forget that they also would die tomorrow. I don’t understand why somebody will kill a nursing mother who is lawfully going about looking for her daily bread. This is no doubt a very trying moment for the family. But just like Our Lord Jesus Christ commanded us to forgive 70 times seven times, please find a place to forgive those who killed your wife so that you can receive the mercy of God.”

Bishop Goton, who was in company with Rev Father Andrew Batari, the parish priest of Our Lady of Loreto Catholic Church, Fadama Mada, where the deceased was a devout member, then led a short prayer for the family and for the repose of the soul of the deceased.

Will the police find Lawrencia’s killers and bring them to book? Time will tell.