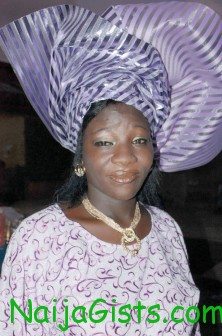 A new rival clash among gangsters in Mushin, Lagos State has claimed a nursing mother and hairdresser plying her trade in front of her mother’s house at 5, Onifade Street, Mushin was hit by a stray bullet when six armed youths invaded the street to settle scores with members of a rival gang.

3 others sustained injuries during the attack and are being treated at a private hospital in the area.

The deceased, Mrs. Fatimoh Abiola (nee Obidare), 23 was hit by one of the bullets fired indiscriminately in the air by the six-man armed gang when they entered the street.

A witness told P.M.NEWSthat the armed youths came in three motorcycles at about 9 p.m. and started firing into the air to scare residents.

The hairdresser, whose little girl is six months old was said to be preparing to go home when she was hit by the strayed bullet of the warring youths.

A co-tenant, who did not want her name in print disclosed that Mrs Abiola gave up the ghost on the way to the Lagos University Teaching Hospital, Idi Araba where she was rushed to.

“I was in the room when I heard a loud sound. I thought somebody dropped a banger in the passage. When I came out, I saw youths firing guns into the air. I ran inside for my dear life. Later someone came and told me that Fatimoh had been shot. I did not believe the report until I saw Fatimoh lying on the floor with blood all over her,” she narrated.

Mother of the deceased Mrs. Kuburat Obidare, who spoke with P.M.NEWSon phone confirmed that a stray bullet fired by the warring youths killed her daughter and called on the police investigating the matter to bring the culprits to book.

Narrating the circumstances surrounding her daughter’s death, Mrs Obidare said: “She had just finished dressing a customer’s hair and was preparing to go home when the incident happened. Before she was shot, she gave me her six-month old daughter to hold so that she could pack her wares. Not long after this, someone called me in the room and told me that she had been shot and was lying on the floor. I rushed out and saw her on the floor. We were taking her to the hospital when she died. She was pronounced dead at LUTH.”

Mrs. Obidare blamed the constant clashes in the area among youths to the activities of politicians fighting over spoils of office. She disclosed that the youths were armed by the politicians who used them during the electioneering campaign to intimidate their opponents.

Attempt by P.M.NEWSto speak with the husband of the deceased, identified as Oriyomi was not successful as he was said to have travelled to the East on official duty.

A policeman on duty at the Alakara Station, Mushin confirmed the incident, adding that investigation was ongoing.(PM news)