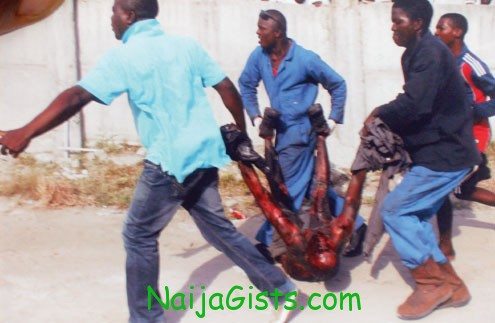 A victim being rescued by security operatives

In response to complaints from local resident of a gas explosion that hit Marina Lagos yesterday, Lagos state government in a statement, explained that the explosion occurred by accident from a ship undergoing repair at the Jetty, adding that it was caused by a gas cylinder presumably being used aboard the ship.

“The effect was directly felt by some vehicles parked opposite the scene of the accident but no life was lost and the only casualty involved is receiving adequate care.

“It is instructive to note that the Lagos State Emergency Management Agency (LASEMA) and other rescue agencies have been drafted to the scene to take firm control of the situation. There is, therefore, no need for the public to panic,” the government stated.