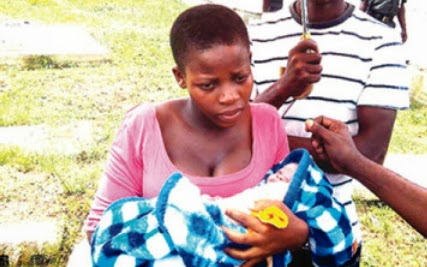 Police officials in Akwa Ibom have arrested a nursing mother identified as Imaobong Udoh who sold her newborn baby girl.

4 other criminals who participated in the baby sale were also arrested.

They are the buyer, Mrs. Regina James; her husband, Mfon James; the traditional birth attendant who delivered the baby, Mrs. Comfort Henry; and Mr Emmanuel Okon, a homeopathic doctor, who arranged the sale.

Commissioner of Police, Mr. Umar Gwadabe, said in Uyo on Monday that the father of the baby had reported the theft to the police, leading to the arrest of the suspects.

“Based on the report, the suspects were arrested.

“Mr Emmanuel Etim Okon, was the one that arranged the infamous deal and personally conveyed the baby from the point of delivery at Nna-Enin in Uruan Local Government Area to the buyers at No. 37 Church Road, Uyo.”

The police boss explained that Regina allegedly paid N150,000 to the mother of the baby and N110,000 to Okon, the homeopathic doctor, for his services.

The commissioner stated that the accused would soon be arraigned in court and warned child thieves to steer clear of the state.

He explained that the state would not be conducive for their illicit trade.

Husband of the buyer, James, who spoke with PUNCH METRO said when his wife told him she was pregnant, he gave her money for ante-natal care, but was surprised to hear that she bought the baby.

He said, “l am a trader. My wife, Regina, told me she was pregnant and I gave her money for ante-natal. One day, she told me she was in labour and later informed me that she had been delivered of a baby girl.

“I did not know she bought the baby since she has given birth to four children, though three died.”

However, the homeopathic doctor said Regina brought the mother of the baby, Imaobong, to him so that he could take care of her during ante-natal.

He said Regina had explained to him that the father of the baby was not financially buoyant to take care of her.

He denied collecting N110,000 from Regina, stating that he only collected N30,000, which was the cost of delivery of Imaobong’s baby.

“When Regina brought Imaobong to me, she told me that the man responsible for the pregnancy was unable of take care of her.