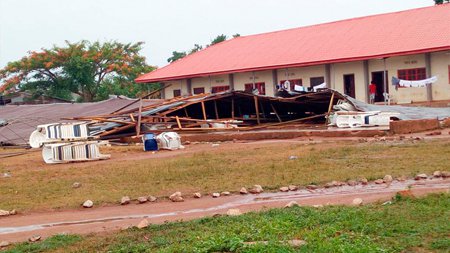 A heavy rainfall suddenly brought down the roof of the lecture hall where most of them took shelter in and trapped them.

Rescuers were quickly mobilised to rescue the trapped victims who sustained minor bruises.

No death was recorded as the injured were rushed to the NYSC camp clinic while others were taken to the Igbinedon Teaching Hospital.

Pastor Adeboye: All Christians In Nigeria Call Me Daddy, When Anyone Of Them Dies It’s My Son That Is Dead
Photos: Kenneth Copeland At Canaanland Ota Ogun State Nigeria For Living Faith Church 37th Anniversary