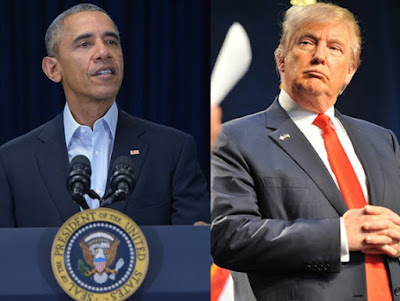 Obama’s Comment On Donald Trump: What US President Said About Presumptive Republic Presidential Nominee In Washington On Friday

US President Obama has urged US media houses to vet NY billionaire, Donald Trump’s past statements and stances as he assumes the status of the presumptive republican presidential nominee.

Hear what Obama said about Donald Trump at a press conference in Washington on Friday:

“It’s important for us to take seriously the statements he’s made in the past,”
“I just want to emphasize the degree to which we are in serious times and this is a really serious job.”

“This is not entertainment. This is not a reality show. This is a contest for the presidency of the United States,”

“If they take a position on international issues that could threaten war or has the potential of upending our critical relationships with other countries, or would potential break the financial system – that needs to be reported on,”.

Continue Reading
You may also like...
Related Topics:comment, donald, Obama, trump, us presidency