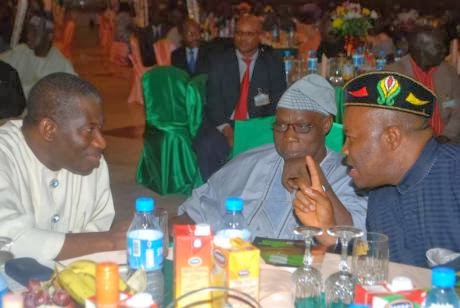 Obasanjo & President Jonathan Had Breakfast Together In Kenya Today

Days after former Nigerian Head of State, Olusegun Obasanjo wrote a long and furious letter to President Goodluck Ebele Jonathan, the duo have been spotted together having breakfast.

GEJ and Obasanjo had breakfast in Kenya today as they celebrate independence day with Kenyans.

Here is how Channels TV reported it:

President Goodluck Jonathan and former president, Olusegun Obasanjo on Thursday had breakfast together in Nairobi, Kenya. Both men were among other African leaders that graced the 50th Independence Anniversary celebration of Kenya on Thursday, December 12. Obasanjo’s visit was said to have taken everybody by surprise as it contradicts the expected nature of the relationship between both men, owing to recent public criticisms of the President by Obasanjo.

The unexpected meeting held prior to the anniversary event which was held at the Safaricom Stadium in Kasarani, Nairobi with former president, Obasanjo paying a surprise visit to President Jonathan at the Intercontinental Hotel, Nairobi where they had a private breakfast together.

Obasanjo, who had the breakfast with President Jonathan had written a strongly worded letter, which went public earlier this week, accusing him of performing below par and taking actions calculated at destroying the country.

Meanwhile, in his speech, at the event, President Jonathan called on all Kenyans to unite. According to him, there was no alternative to unity if Kenyans must move their nation forward. In building their nation, Jonathan told Kenyans that they must make unity their focal point.

He said that the destiny of Kenya lies with its people and as such, the people must strive hard to take their country to a greater height. President Jonathan said that he was happy that former Kenyan Prime Minister, Raila Odinga was present at the event and working with President Uhuru Kenyatta.

“Nobody can love you more than Kenyans, so you all have to jointly develop your country. All Kenyans should come together to form an inclusive society.
“Since 2007, many African countries like Kenya have been celebrating 50 years of independence and freedom, our founding fathers talked of political freedom to be followed by economic freedom.

“The present generation of African leaders must work hard on science and technology as well as industrialisation, so that there could be economic development and freedom” Jonathan stated.

Obasanjo was said to have sat quietly during the event and was making calls on his mobile phone at intervals while the event lasted.

Oprah Winfrey Doesn’t Like Having Children “My Kids Would Hate Me”
Lawyer & Friend Found Dead Inside Car In Asaba, Delta State After Land Court Case