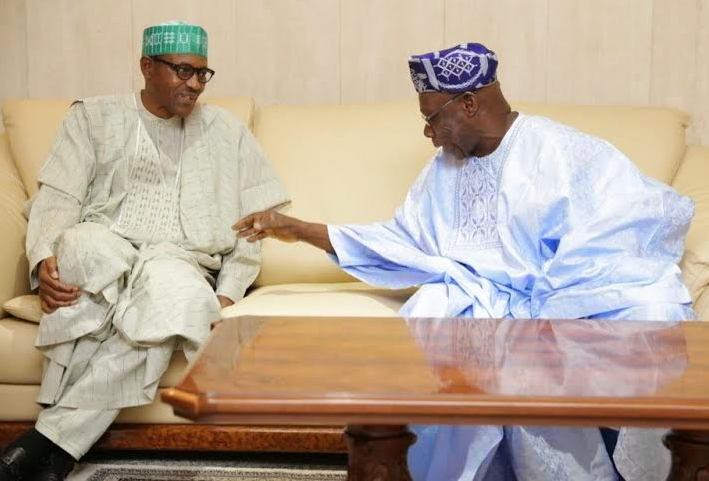 August 24, 2015 – Obasanjo To Nigerian Students, NANS: Buhari Will Clean Up Jonathan’s Mess, I’m Solidly Behind Him

Ex-President Olusegun Obasanjo has said there is no alternative to President Muhammadu Buhari or his leadership style because of the peculiar period in the country’s life.

He urged Nigerians to support Buhari to bring about the desired “change” in the country.

Obasanjo noted that a lot of things that were left undone in the last six years are hurting the country today but said there is a ray hope in the government of President Buhari that the expected change for the better would soon come.

The former President made this declaration at the weekend when a delegation of the National Association of Nigerian Students (NANS), led by the Vice – President, Ogunkunade Oluwatoyin, visited him at his residence on Presidential Hilltop Estate, Abeokuta, Ogun State.

Obasanjo who is a former Chairman, Board of Trustees of the Peoples Democratic Party (PDP) before quitting party politics early this year, said he stuck out his neck for change during the last general elections because things were no longer going the way it ought to be for the country.

The former president spoke in response to the demands of the students, particularly as it concerns fighting corruption, security, economy, unemployment and improvement in the standard of education.

He noted that God loves Nigeria and that he would continue to support and pray for the success of President Buhari and his administration.

Obasanjo said: “ I will underline what I regard as the most important right now which is key that deals with almost all the points that you raised and that is the issue of leadership. I believe very sincerely that God loves this country.

“I have said it on a number of occasions that when you go through the history of this country, particularly during the pre-independence and how many times we have gone through difficult times but we have not fallen over, you would say like I have said over a number of times that God really loves this country.

“And the general elections you talked about is a typical section of it, many people believe that after that election there will be no more Nigeria, many had even sent their families abroad, to some of us there is no where we can live abroad they will say you with all your mouth that you were running so you can even run out of Nigeria and come here.

“I have nowhere else that I can go and live in except Nigeria. Some said that they know the NADECO route but I do not know the route and I do not want to know it. So God did it almost miraculously and the election took place although some did not want it to take place but it took place.

“And some did help in no small measure to make sure we that got what God has destined for Nigeria. But in the first instance, we must give thanks to God and in the second instance we must thank those that made sure that we had a change and a credible change and the relative peace that we enjoyed before, during and after the election.”

“The issue of good leadership which was what many of us were clamouring for. There is no angel, for me there is no messiah except Jesus Christ, but there are leaders who are concerned about what is happening in this country, leaders that are so passionate about this country and who are ready to stick out their necks for this country and God has given us such an individual as the President of the country.

“What has happened is an indication that change has come and that our dreams may come true. But all that is required of everyone, young and old, youths and even students is to give unalloyed support to the government and where we believe that we should give criticism that is objective and positive we should give.

“For me these points that you have made about what is going on in this country, about corruption, about the economy, about security, we all know these and that is why some of us prepared to stick out our neck to achieve change because most of these things have not been addressed for the past six years.

He added that nobody is too young or too old to give meaningful contribution,” even what you are doing here is part of it, but do not limit it here, let us take it to them, those at the Senate, House of Representatives, those at the state level men and women of goodwill in this country.”

Going down memory lane, the former president said, “I am a victim of military regime, I was put in jail and meant to be killed by (the Sani Abacha regime)..If there was democracy there might have been fair amount of trial. So I heard you, I note your request and as time goes by when I do have opportunity in the community of leaders when you want me to pass your message, I will deliver your message.

“But one of the things that gives me great concern is youth employment, there is no employment for the youths in this country. Somebody told me that we can admit about seven thousand students in a year but those who seek admission into the university probably double that number.

“If you don’t have a target about the actions that you are about to take then you do not have anything to work up to. I believe that having a target is necessary. Let me give the history of the Nigeria’s civil war. I was one of those who did the appreciation of the war and wrote the order (plan) we thought that the war would end in six months and we made a plan for six months, but the war took 30 months but you cannot just leave it open, it must be an open ended, now fix a target and then those who are to carry it out will know that they have time and space within which to work.”

[Reported By Ernest Nwokolo, The Nation]