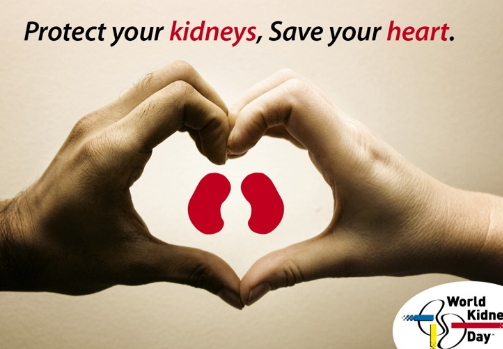 To mark World Kidney Day on Wednesday the 8th of March 2017, some medical experts under the auspices of an hospital gathered together in Lagos to raise an awareness on kidney disease.

One of the experts, a Consultant Nephrologist at OAUTHC Professor Fatiu Arogundade said everybody should do everything possible not to get their kidney damaged and it starts with avoiding its causes, and being vigilant on ones urine.

“An end stage kidney failure does not occur suddenly, but gradually. If one is conversant with his numbers- Blood pressure, urine analysis, among others and keep his weight down, one can easily prevent kidney disease’’.

For instance foamy urine should not be taken lightly, “A full bladder can make your urine stream faster and more forceful, which can cause foam. The urine can also get foamy if it’s more concentrated, which can occur due to dehydration or pregnancy. Sometimes, the problem is your toilet but protein in the urine is another cause, and it’s usually due to kidney disease.

Unhealthy kidneys lose the ability to remove protein waste and it starts to build up in the blood. The condition is often a sign of kidney disease. Healthy kidneys do not allow a significant amount of protein to pass through their filters. But filters damaged by kidney disease may let proteins such as albumin leak from the blood into the urine. So one needs to do Proteinuria test to be on the safe side. It costs less than a thousand naira,” said Prof Arogundade.

He said kidney disease often has no early symptoms. One of its first signs is proteinuria that is discovered by a urine test done during a routine physical examination. Blood tests will then be done to see how well the kidneys are working.

Prof Arogundade said BMI (Body Mass Index) under 18.5 – is considered very underweight and possibly malnourished, 18.5-24.9 – you have a healthy weight range for young and middle-aged adults, 25.0 to 29.9 – you are overweight and over 30, you are considered obese.

And the connection between obesity and kidney disease?

He said, “In terms of renal failure, people that are overweight have metabolic syndrome like abdominal obesity, impaired glucose tolerance, impaired fasting glucose or diabetes, hyper lipidemia coupled with hypertension.

Presence of three or more of these conditions in an individual prone the person to kidney disease, the risk is higher in them than a normal individual. So people that are overweight should watch it and bring down their weight to optimal body weight of achieving a BMI of less than 25kg per metre square.”

Those that presented to the hospital in community studies across the country are high, ranging from 18 percent of the population to 20 and 26. This is an indication that that kidney disease may be increasing in prevalence in our communities,” he stated.

He advised that to beat down on being overweight or obesity, one should exercise, diet, and avoid excess salt and alcoholic drink.