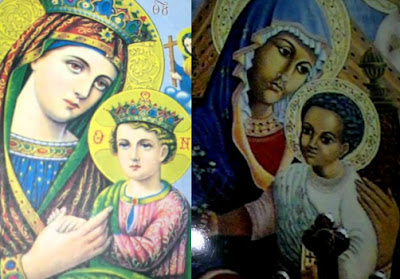 I was startled beyond words when I saw it: a picture of the icon of Jesus that served as a visual accompaniment to last week’s piece in this column, together with the caption under the picture. The picture of the icon: a very White Jesus, with blond hair and the bluest of eyes. The caption: “An icon of Jesus Christ from the Ethiopian Orthodox Church”. Obviously, something was wrong in that juxtaposition, very, very wrong. This is because in the iconography of the Ethiopian Orthodox Church, Jesus is not White, let alone being blond and blue-eyed; he is Black in the way and manner that Ethiopians are black.

As a matter of fact, the iconography of the Ethiopian Orthodox Church is world-famous for the distinctiveness of its iconography: not only Jesus but Mary, his mother; the three Magi; the twelve disciples of Christ; the saints; angels; throngs of worshipers and the faithful in diverse formations and expressions of suffering, mortification, rapture or beatification; they are all Black. Needless to say, God himself is Black in this extraordinarily distinctive iconography of the Ethiopian Orthodox Church. Indeed, for the most part, virtually all the divine and human personages in the iconographic tradition of this formation of Christianity all look like present-day Ethiopians. [By the way, this is hardly surprising since it is not yet a million days since the real, historical Christ lived and walked on this earth, this planet]. If all this is indisputably true, why then had last week’s picture and its caption got the facts, the referents so wrong?

First of all, let me state that the error probably has its circumstantial roots in a fairly simple and innocent mishap, this being the frustrating but relatively benign pressure of deadlines on the production of newspapers and their contents. For instance, like all the other columnists in this newspaper, I work with and around a deadline. In my case, it is every Friday at 6 p.m. In turn, my Editor and his staff also work with deadlines that the printing and production departments of the newspaper impose on them. Now, I testify that on the basis of my experience with both The Nation and The Guardian, everybody tries to make as few errors as possible within the great rush or pressure of these deadlines. But we are all human and once in a while, errors do occur. Let me explain.

Sometimes, I read over what I have sent off for publication in my column and to my dismay, I discover errors too late for them to be corrected. For one instance of this kind of experience that is thankfully rare, I declared in an “Erratum” at the end of the column three weeks ago, that I had twice substituted the word “complementary” for “complimentary” the previous week. And indeed, two weeks ago, in the pictures of the two candidates in the Senate election in Alabama, the name attribution was wrong, the name Doug Jones appearing under the picture of Roy Moore and Moore’s name appearing under the picture of Doug Jones. On the basis of seeing this kind of error as a manifestation of occupational hazard, I can well imagine that working under the tyranny of deadlines, someone in the Editorial Division, Layout Section, last week simply reached for the first available icon of Jesus and simply superimposed the caption I had indicated on it. And that may have been why we had that garish juxtaposition in last week’s column: A Nordic-White Jesus where we should have had a Black Jesus from the distinctive iconography of the Ethiopian Orthodox Church.

But there are also other probable causes of the error. Let me identify a few of them. What if the page editor or the layout person who searched for and chose the White, Nordic Christ is unaware of the existence of the iconographic tradition of representing Christ as Black in the Ethiopian Orthodox Church? What if he or she knows but prefers anyway to use the Nordic image? What if the impulse was in fact consciously or unconsciously sardonic: to jar readers’ sensibilities with the extreme juxtaposition of a snow or milky White Christ with the specific racial or epidermal designation of Blackness in the words, “Ethiopian Orthodox Church”? Indeed, as I discussed these various possibilities with my friend, Femi Osofisan, last Sunday, he was much inclined to this particular cause of the error. This is because in my friend’s opinion, out there in the phantasmal world of contemporary Nigerian and African Christianity, there are probably hundreds of thousands of the faithful to whom a Black Christ is disturbingly anti-normative.

Whatever might have been the conscious or unconscious cause of the error, the following facts and circumstances of the diversity and heterogeneity of Christianity’s visual and iconographic traditions are very pertinent to this discussion. First of all, there is nothing normative at all about what I am calling the Nordic-White Christ; it is only one out of many traditions of icons of Christ as Messiah and Son of God. In other words, just as there is a different Pope for the Eastern Orthodox Church than Pope Francis of the Roman Catholic Church – the People’s Pope – the iconographic representations of Jesus in these two main branches of European Christianity are different.

Secondly, since Christ was an actual historical person from a particular community of human beings (Palestinian Jewry), we are not without a sense of what he must have looked like. Nonetheless, at this point in time, what Christ himself must have looked like is completely irrelevant to the icons and statues that have been created to represent him. In other words, our Christian brothers and sisters must realize that what they think of as the representation of divine godhead when they see icons of Jesus is not an emanation from God Herself or Himself; it is a derivative of specific ethnic, racial and cultural segments of the human race. And thirdly, please check out the iconography of the Ethiopian Orthodox Church for its elegance, its disarming grace and its distinctiveness, especially given the historical fact that this African tradition of Christianity actually predates the Roman Catholic Church, the oldest Western heritage of Abrahamic religion.

Of the three Abrahamic religions – Judaism, Christianity and Islam – Christianity in particular has a great love of icons. In contrast, Islam, historically the “youngest” of these religions, has an equally great disdain for icons. Which is why there are no icons of either Allah himself or of Muhammed, his Prophet. For this reason, in the representation of God as Omniscient and Omnipotent – the ultimate idealist conception of Perfection – Islam has an advantage over Christianity. This is because it does not present the Godhead in the image of any particular race, epidermal hue, ethnicity or gender. As we have seen, to the Ethiopians, God, Christ and his Mother are all Black while to historic European Christianity, God has been and continues to be White. But the universality, the Oneness of the Divine that Christianity’s iconographic traditions greatly undermines is compensated by its central theological message of there being no difference between Jew and Gentile. In other words, the icons of Christianity may declare all they want about which human group really represents God; however, the narrative traditions of the religion – as purveyed through symbolic tales, parables, proverbs, psalms, epistles and diverse other media – say something else, this being the central catechism of the essential Oneness of humanity.

I write these words as one who stopped being a religionist more than four decades ago. In that case, why am I so interested, so passionate about these matters? The answer is simple and uncomplicated: religion is too important to be left to the religionists. I have stated again and again in this column that my central view of religion is not whether one is a believer or not a believer, it is what your belief or unbelief makes you think and act or conversely, fail to think and act. For a very long time, European Christianity taught the idea, the belief that Black people, being supposedly unalterably inferior to Whites, could in no way be deemed to be a valid human incarnation of God. To this day, that idea lingers still in pockets of Christian belief, worship and practice in parts of the Western world. But we know that Christ himself was a revolutionary who believed in justice, equality and peace for and between all women and men. This particular heritage of Christianity survives – admittedly precariously – in spite of the diverse, particularistic and ethnocentric iconic representations of Jesus.

A White, blond and blue-eyed Jesus? It belongs mostly to the movies and the popular branding of Jesus in the marketplaces of Pentecostal neo-capitalism!. 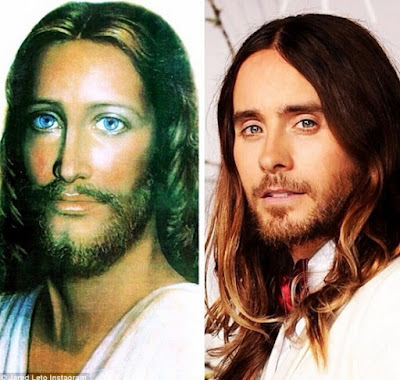 About the author: Biodun Jeyifo writes from Ibadan, bjeyifo@fas.harvard.edu

9 thoughts on “Opinion: Jesus Is Not White, He Is Black Like Ethiopians”